So are you ready to stay up on that exercise thing this year? 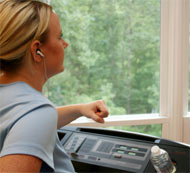 by Teresa Bell Kindred (01/04/2008) | Just for Women
One of my New Year's resolutions is the same one I make every year: take better care of myself. In an effort to firm up the body parts that tend to be losing their elasticity, I joined a gym for women last January. At first I was attending regularly, at least three times a week, but then something happened and I missed one week, then two, then three. Well, you know how it goes

I talked to a friend of mine and mentioned my membership at the gym. She asked which gym and when I told her she replied, "I don't belong to that one, but I do belong to three others."

"No, I'm not. I have really good intentions but those intentions don't get me very far," she said.

I did get back to the gym and went back to working out three times a week. Then I started having dental problems, lots of dental problems. What began as replacing a lost filling escalated to a root canal, and then several weeks later, an abscessed tooth. It took four hours and three people to remove that tooth. I took it home and slept with it under my pillow for a week, but the tooth fairy never came.

After that episode, I got back in the saddle again, or should I say back on the treadmill again, only to come down with a sinus infection. I recovered from that; then we decided to build a house, sold ours, and the packing up and moving process began.

During that chaos, I had a root canal followed by mysterious pain in my face and jaw for three weeks, and then another root canal. Because I couldn't identify exactly where the pain was coming from, we did the wrong tooth the first time. That's right — two root canals in one month.

One of the walls at the gym is the Wall of Fame with pictures of members who have achieved their goals. I ran into the owner of the gym the other day and suggested she create a Wall of Shame next to it with my picture beneath it.

If my goal is to take better care of myself, shouldn't I include spiritual goals as well? Many of us want to get in better shape physically, but what about spiritually? Like my friend who joined three gyms, I'm afraid many of us have good intentions that don't carry us very far. We join a church and start out full of enthusiasm, only to find that the daily business of living distracts us from Bible study, attending services and prayer. Getting in shape physically takes time and effort and so does being a Christian.

That's right — two root canals in one month.
So again this year, my New Year's resolution is to take better care of myself, physically and spiritually … and to take out more dental insurance!

So, my dear brothers and sisters, be strong and steady, always enthusiastic about the Lord's work, for you know that nothing you do for the Lord is ever useless (1 Corinthians 15:58 NLT).

"Treadmill of Life" by Teresa Bell Kindred is licensed under a Creative Commons License. Heartlight encourages you to share this material with others in church bulletins, personal emails, and other non-commercial uses. Please see our Usage Guidelines for more information.