Are we asking the wrong question? 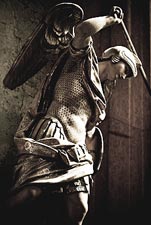 by Lee Wilson (11/29/2008) | Leading in Hope
If you're a Bible student, you're most likely familiar with the battle of Jericho (Joshua 5:13-15;  Joshua 6:1-27). It was only recently that I noticed a key part of that story that I'd read past many times before. Here are the two key verses from which I'll make my point.

Now when Joshua was near Jericho, he looked up and saw a man standing in front of him with a drawn sword in his hand. Joshua went up to him and asked, "Are you for us or for our enemies?"

"Neither," he replied, "but as commander of the army of the LORD I have now come"

Does it strike you as odd that the Commander said he was on "Neither" side? It puzzled me when I recently read that passage. How could God not be on the side of the Israelites who were His people? He had said He was their God and had brought them through terrible times. How could He possibly be neutral between His people and His enemies? It didn't make any sense. Then we read a footnote in the NIV Study Bible:

Joshua and Israel must know their place — it is not that God is on their side; rather, they must fight God's battles.

I thought that was a brilliant and very helpful statement. We are certainly supposed to fight on God's side.

Jesus took strong stands!
I've often heard people suggest that we're not really in a fight. That Christianity is somehow a neutral religion that doesn't take positions or stands. Nothing could be further from the truth. Jesus was not crucified because He didn't take stands. It was the very fact that He did take stands that aroused anger. Some of His extremely bold stands were claiming to be the Son of God, that the religious leaders of the day were "white-washed tombs" full of bones and that He could tear down the holy Temple and rebuild it in three days. He took strong stands and made enemies because of it.

But as the text demonstrates, it's up to us to fight battles on the side of God. His priorities come first and we must choose positions and convictions based on His will. So rather than looking at it as God taking sides in politics, religion, morality, or other aspects of life, we must focus on God's eternal Word that serves as truth in these matters. It seems fitting then to conclude that we are to stand on the truth rather than flattering ourselves into expecting the truth to stand with us. We can be wrong, God's truth cannot.

So which side are you on?

"Which Side?" by Lee Wilson is licensed under a Creative Commons License. Heartlight encourages you to share this material with others in church bulletins, personal emails, and other non-commercial uses. Please see our Usage Guidelines for more information.