Can you turn loose what you have to find the joy you don't have? 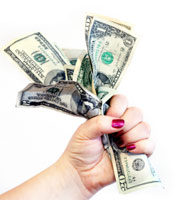 by Ron Rose (12/06/2007) | Together in His Grace
Truth is, the best gifts of all are not meant to be kept or even possessed; they are intended to be given a way ... to be passed on from person to person.

Lewis Hyde, author of "The Gift," tells of a Massachusetts' pilgrim who is invited into a Native American lodge and welcomed with a ritual smoking of the peace pipe. After the ritual is completed, the Native Americans give the symbolic pipe to the pilgrim. The pipe is a peace offering and is traditionally circulated among the local tribes, staying in each lodge for a time, but always given away sooner or later. However, our pilgrim didn't know about the tradition. In his world, he now owned a valuable treasure ... his own personal peace pipe.

Months later, in a surprise visit, the leaders of a neighboring tribe shocked the pilgrim with the expectation that the pipe would given to them.

The pilgrim called them "Indian givers"! (Yes, that's where the phrase comes from, according to Hyde.) In his mind, these poor natives just didn't grasp the growing application and appreciating of "private property." In their minds, this poor pilgrim didn't grasp the true meaning of the gift.

Like the pilgrim, we tend to hold on to our gifts too long. I think sometimes we even try to possess them. We try to keep them safe and hold them tight, for fear we might lose them. This focus on self misses the point altogether. As the apostle Paul reminds us, "... the Lord Jesus himself said: ‘It is more blessed to give than to receive'" (Acts 20:35 TNIV).

One thing is for sure: the gifts we receive from God are all meant to be given. They are not ours to keep, they must be shared: they must be kept in circulation to bless others.

Do you have possessions that really need to be on the move, that need to be given to others? What gifts has God given you that need to be shared — things like grace, forgiveness, second-chances, love, stuff, time, attention, tenderness, patience, and talent?

Isn't it time for some of your closely guarded private possessions to find a new home? You've been given a lot, so doesn't that mean you have a lot to give? Get creative and turn loose of what you "own" and find the greater grace in giving.

"The Best Gifts" by Ron Rose is licensed under a Creative Commons License. Heartlight encourages you to share this material with others in church bulletins, personal emails, and other non-commercial uses. Please see our Usage Guidelines for more information.