The Joy of Giving

How can this bring me more joy? 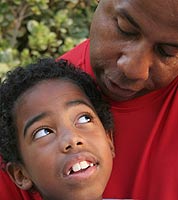 A little boy I know, only eight years old, was tops in his class in sales for a school fund raiser. The prize was $25. Now $25 for him to spend however he pleases is a lot of money! The little boy's father asked him one evening later that week what the boy thought he would do with the money. There are a lot of Lego sets to be had, after all. That kind of money would buy a lot of books or toys, or maybe even a computer game. The little boy thought for a minute, ideas flickering like diamonds in his blue eyes. He handled those ideas, holding them up to the light, judging their brilliance, then made his decision. The expression on his face spoke as much as his words; they didn't display the momentary excitement that flashes across an eight-year-old face when he receives one more toy, but shown with a quieter, more satisfied joy — the joy of knowing he's made a good choice.

"I want to take you to a football game," he told his dad.

And his dad had to turn his head a little so the boy won't see the tears he could feel stinging his eyes. (Wonder why he feels he has to hide them?) He shed tears, not just because his son made a decision to use the money for something special for them to do together, but also because when his son could have been thinking of all the things he could have bought for himself with $25, he was thinking instead about ways he could use it to make someone else happy.

"Let it be that he will always think that way," the father prayed later that night.

Another little boy, maybe no older than eight, squinted in the bright sun as he watched the men talk. There are thirteen of them, and twelve seem to have made up their minds about something. They were just having a little trouble getting the other one on board. He overheard some of the words — "hungry," "all these people," "away." But, the lone holdout shook his head, made a gesture that took them all in.

The little boy could read his lips. It looked like he said, "You give them something to eat."

They looked at each other, at the ground, at the huge crowd spread out on the hillside below them. They scowled, frowned — one of them threw his hands up in the air in exasperation. But, the one they're trying to convince has this interesting expression on his face — he's enjoying this. As if he knows the boy has been eavesdropping, the man looks right at him, smiles, and winks.

The boy looks at the huge crowd, then takes his family's picnic basket and looks inside. He counts the loaves of bread — just five, pitiful, flat little things — and a couple of fish his dad had caught the day before. "Well, it's a start," he thinks. He gets up, puts the basket under his arm, and tugs on the cloak of the closest of the twelve.

Minutes later, as the boy's head swam with the wonder of it all, the whole crowd is eating fish and bread — his fish and bread. And everyone had more than enough. And the man, who moments before had given thanks for his fish and bread and divided it among the people, was looking at him and smiling.

Oh, we get so caught up in getting what we think we need that sharing what we already have seems wrong, somehow. We become conditioned, I guess — conditioned to think that human beings are rivals fighting for the same meager resources. Whatever someone else has is not available for my use. We grow so accustomed to competition that we make the fundamental mistake of believing that the greatest blessings of life have to do with receiving one thing or another.

This sharing thing is a risky proposition.
Jesus called into question this perspective of scarcity. He dared to suggest that our values were upside-down: that the joy of receiving doesn't begin to compare with the joy of giving, that the clearest evidence of God's blessing in a person's life has less to do with how much he has than with how much he gives, and that God's work can be more clearly discerned in what he does with what you surrender than with what he drops into your lap. "It is more blessed to give than to receive," is a revolutionary statement that calls into question the economic realities under which we mostly operate. We know we're supposed to believe it. We just struggle with finding a place for such a belief in the world in which we operate.

Maybe it has to do, in the end, with faith. People who choose to define blessedness by what they give and not what they receive do so because they believe that in one way or another, there is enough for everyone to enjoy. Often, I think, they share because they believe that "life does not consist in an abundance of possessions" (Luke 12:15) and that "people do not live on bread alone" (Luke 4:4).

Where others fear shortage, these people see God's grace and plenty. When others give in to the impulse to hoard, they are ruled by the generosity of the Holy Spirit. Where others clutch their possessions more tightly out of fear, their hands are opened by the sharing nature of the One who opened his hands to the nails.

Make no mistake. This sharing thing is a risky proposition. What if, after all, the world is right? What if you share and then, whenever and wherever the accounting is done, it turns out that you don't have enough? What if you don't get your Lego? What if no one passes a portion of "your" bread and fish back to you?

That's all possible. And yet Jesus promises that a lifestyle of giving, not receiving, is the way to live in true joy and under God's approving smile. So maybe blessedness isn't what we think it is. It strikes me that Jesus never lived a life of plenty and yet spoke of God's blessing as if he knew it first-hand. Maybe giving opens up whole new realms of joy and peace and abundance that receiving never even hints at.

There's only one way to find out, of course. Stop reading and go find a thing and a way and a place to give. Time. Energy. Possessions. Talents. Money, of course. Food. Give more to the church. Work in a food pantry or a homeless shelter. Spend time with a lonely person. Find your basket of loaves and fish, your $25, and give it to your Father. And then watch as he makes someone's day with it.

"The Joy of Giving" by Patrick D. Odum is licensed under a Creative Commons License. Heartlight encourages you to share this material with others in church bulletins, personal emails, and other non-commercial uses. Please see our Usage Guidelines for more information.