What will you do with this blanket? 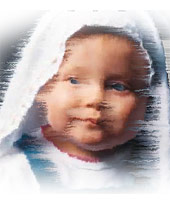 by Alan Smith (03/03/2007) | Timely Truths
One Sunday, a mother could not attend church due to illness and asked her young daughter what the lesson had been about that day. The daughter answered that it was about "getting prizes for going to church."

The mother thought that was strange and questioned her further. The little girl finally said, "Well, the preacher said, 'Don't be scared and you'll get your blanket.'"

Needless to say, the Mom was perplexed. Later the minister stopped by to visit and the Mom asked him what that morning's lesson had been about. He said, "My topic was 'Be not afraid, the comforter is coming.'"

The King James Version does indeed refer to the Holy Spirit as a Comforter:

"But the Comforter, which is the Holy Ghost, whom the Father will send in my name, he shall teach you all things, and bring all things to your remembrance, whatsoever I have said unto you" (John 14:26).

The Greek word that's used here to describe the Holy Spirit is "paraklete" and, as the NET Bible explains, "Finding an appropriate English translation for [paraklete] is a very difficult task. No single English word has exactly the same range of meaning as the Greek word." That's why you'll find such a broad range of words used in this verse in different translations.

Whatever the exact word is that should be used, the idea is clear: Jesus promised his apostles that they would not be alone when he ascended back to the Father, but that they would receive the Holy Spirit who would serve the purpose of teaching them what to say and giving them the ability to perform miracles as evidence that their words were from God.

The idea is clear.
Thanks be to God for revealing His will to us through those men! It is because of the Comforter's presence and power that Paul was able to make statements like this:

For this reason we also thank God without ceasing, because when you received the word of God which you heard from us, you welcomed it not as the word of men, but as it is in truth, the word of God, which also effectively works in you who believe. (1 Thessalonians 2:13)

Rejoice, for the Comforter has come!

"The Comforter" by Alan Smith is licensed under a Creative Commons License. Heartlight encourages you to share this material with others in church bulletins, personal emails, and other non-commercial uses. Please see our Usage Guidelines for more information.