All Those Terrible Stories?

Are we listening to what we are saying? 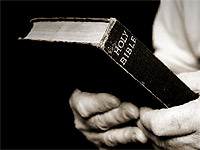 by Rubel Shelly (09/11/2007) | Leading in Hope
Someone asked me a while back about "all those terrible stories" in the Bible. I admit that I was a bit taken aback by the question. So I asked him to explain by naming some of the stories he had in mind.

He started with some of the familiar ones that are left half-told in Sunday School. For example, the story of Noah and the Ark is hardly a sweet tale about animal husbandry. It is actually a story of judgment in which everybody in the world gets drowned — except for Noah and seven members of his family.

Then he named some of the lesser-known stories of the Bible that rarely ever get mentioned at church. Abraham's abuse of Hagar, the horrible rape of Diana, bears turning on some kids who were taunting a prophet, Jephthah's murder of his own daughter — and there were more. I'll give the fellow credit for reading the Bible more closely than some. He knows what is there.

The answer I gave him seemed to make sense to him. He even said it helped a bit. But, I thought I'd ask you to ponder it too.

In a nutshell, I spluttered something about the Bible being a collection of true-to-life stories that speak of life in terms of its gritty realities. It isn't a "pretty" book. It is a truthful book. It tells the human story without glossing over the dark and ugly scenes. And some of those scenes involve things like heroes behaving badly and innocent people getting ground up in power plays.

The Bible tells the stories without glossing the character flaws of Abraham or Moses, David or Peter. Yet, Scripture also tells of the noble behaviors of a prostitute named Rahab and a soldier in the execution squad of Jesus who dared to marvel at his dignity, composure, and faith.

It tells the human story without glossing over the dark and ugly!
The more I have thought about the answer that I gave the man, the more convinced I am that it was at least in the right direction. The Bible isn't what some of us were led to think. It isn't bedtime stories. It isn't burdensome rules. It isn't a handbook for glib answers to complex problems. It is a family album for the human race. It isn't so much filled with stories as with people. And the exploits of people are messy, unpredictable, and downright weird.

As you read your Bible, see your own life as an extension of its narrative. Don't despair of the unflattering or even the immoral; celebrate God's kindness and eagerness to forgive. Don't live in denial of sleights suffered or abuse endured; name them and bring them into the light for the sake of healing. Accept the success and enjoy the applause; just remember who made them possible.

The theme of Holy Scripture is the redemption of sinful humanity by the love and mercy of God, and the story is still being written in all of our lives.

"All Those Terrible Stories?" by Rubel Shelly is licensed under a Creative Commons License. Heartlight encourages you to share this material with others in church bulletins, personal emails, and other non-commercial uses. Please see our Usage Guidelines for more information.