So what's the point of it anyway? 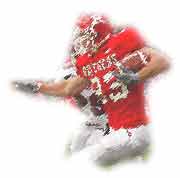 Andrew, Simon Peter's brother spoke up, "Here is a boy with five small barley loaves and two small fish, but how far will they go among so many?" (John 6:8-9, TNIV)

Oscoda Area High School in Oscoda, Michigan, decided the last week of September after only four games that continuing to play football was, well, pointless. And the school district has upheld their decision to cancel the games left on their schedule.

Oscoda was winless after those four games. Not only had they not won a game, they hadn't scored a point. And in spite of pleas from players and their parents, the school and the school district decided that there wasn't really any point in risking getting players injured by continuing to put them out on the field against much stronger opponents.

Surprisingly, Coach Kyle Tobin seems to agree. "When you go to a game on Friday night and see a team physically dominated, those are the indisputable facts," he said. "I have 28 years of coaching experience in high school and college, and I know the difference between a team playing bad and a team that's unsafe." As the board decided to pull the plug on the season, board member Neal Sweet apologized to the players, especially the seniors who will have no further chances to play high school football. "There's nothing I can say other than I'm sorry," he told them. But you're not quitters. You went out there and did your best."

No, they aren't quitters. Seems that the school board, school, and coach have the quitting market cornered.

What no one seems to be taking into account here is that winning is not supposed to be the sole point of high school sports. There are supposed to be lessons taught in amateur sports about character — trying hard and feeling good about doing your best, being part of a team and working with others to accomplish a goal, picking yourself up, looking your opponents in the eyes, and shaking their hands after they've thrashed you. And, maybe most importantly, persevering when you can't really see the point. Yes, players can get hurt, but players and their parents know that. There are reasonable safety precautions and rules that minimize the chances of serious injury.

I wonder if by trying to "protect" these kids, the adults making this decision for them are denying them an important formative experience. Are they teaching them that down the road if they find themselves in a job or a marriage that seems futile, they should just walk away?

How thankful I am that God doesn't give up on what others might consider pointless!

The Noah story fascinates me, just for that reason. God wipes out most of creation because of how badly people have messed it all up, but then he give Moses a mandate to "multiply on the earth and increase upon it." What's the point? Is there any reason to imagine that Noah's descendants will turn out any better than the people drowned in the Flood? And yet God isn't ready to walk away just yet.

When he was told to dip seven times in the Jordan River, Naaman said it out loud: "What's the point?" Feeling alone and afraid in a desert cave, Elijah asked it of God. It must have been on the tip of a lot of tongues when Jesus went to eat with Zacchaeus or when he struck up a conversation with the Samaritan woman at the well. Jesus could have asked it, but didn't, as he prayed in Gethsemane. Certainly his disciples must have wondered many times between "Into your hands I commit my spirit" and "He is not here! He is risen!"

I bet you've wondered exactly that from time to time, haven't you?

God doesn't give up on what others might consider pointless!
The point is that you don't know what the point is! You probably have no idea of how God is prepared to bless your efforts and use what you bring to the table to serve his purposes. You have no idea what he might do in your marriage, or your home, or your office, or your church, or your neighborhood — or even in your own heart — if you will just continue to do what you can, and what you know to be right, and trust in him for the results.

When Andrew brought that little boy to Jesus, he must have done it hesitantly. He must have known the other guys would snicker into open palms. But even then, maybe he knew something about Jesus that is easily forgotten. He doesn't operate by our value system. He doesn't prize what we prize. And he doesn't dismiss what we dismiss.

Learn this about God, if nothing else: he values human beings for who we are and what we can do, not who others think we ought to be or what we think we should accomplish. When you give whatever you have, and do whatever you can, God multiplies it, makes it enough to do whatever he wants it to do. Wouldn't you like to feel, just once, what that little kid felt when he handed Jesus his lunch basket and watched five thousand people get full?

You can, if you'll bring him whatever you have. However small the basket.

On the other end of the football spectrum from Oscoda High School is Rutgers University. For most of the 140-plus years they've been playing the game, they've consistently had one of the worst football teams in the nation. Many people have watched a Rutgers football game and wondered, "What's the point?" And tonight, Rutgers is undefeated and playing Louisville in a game that will possibly determine the national champion. They are ranked in the Top 25 for the first time in thirty years. And even the fact that they're winning isn't the point. That could all change tonight with a loss.

That you can do. You can keep charging onto the field, whatever the field is, and giving all you have to God. And he'll make it enough — not always enough to please the spectators or vanquish the apparent opposition, but enough to do what he wants to do and help you win victories that mean more than the score on the scoreboard.

And that's the point.

"Pointless?" by Patrick D. Odum is licensed under a Creative Commons License. Heartlight encourages you to share this material with others in church bulletins, personal emails, and other non-commercial uses. Please see our Usage Guidelines for more information.