Why in the world would someone want to be an umpire? 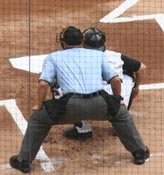 by Rubel Shelly (10/17/2006) | Special Features
The late Lee Weyer was a National League umpire for 26 years. As with every big-league ump, he had to take his share of abuse from both players and fans. Fans can be unmerciful with umps. And players don't always agree with a called third strike when the bases are loaded in the bottom of the ninth.

In the spring of 1980, Weyer was stricken with Guillain-Barre Syndrome. It is a mysterious illness that affects motor control and can also result in blindness. When the initial threat to his life had passed, Weyer's physician told him that he might never be able to work another baseball game.

But Lee Weyer loved the game of baseball and loved his job. So he worked hard at his program of physical therapy. He improved dramatically and regained his muscle coordination. The one thing that did not return to its normal range was his eyesight. Yet, with corrective lenses, his vision was judged to be good enough for him to be allowed to return to work.

A major-league umpire wearing eyeglasses! Can't you just imagine it? "Hey, Clark Kent!" somebody would shout from the stands. Once, as the umpires went onto the field, he heard someone singing "Three Blind Mice." This was Weyer's comment: "I was so glad to be back that it was music to my ears."

If you really want something, you will put all your focus and energy into achieving it. If it is really important to you, you will not abandon your dream just because it is difficult to achieve. If you really want to do it, you will take whatever insults or indignities go with pursuing it.

If you really want something ...

One of Jesus' apostles wrote about such things:

Of course, your old friends don't understand why you don't join in with the old gang anymore. But you don't have to give account to them. They're the ones who will be called on the carpet — and that before God himself" (1 Peter 4:4-5 MSG).

It's always important to remember who you're really trying to please.

"Hey, Clark Kent!" by Rubel Shelly is licensed under a Creative Commons License. Heartlight encourages you to share this material with others in church bulletins, personal emails, and other non-commercial uses. Please see our Usage Guidelines for more information.