Are you clean enough to leave a message? 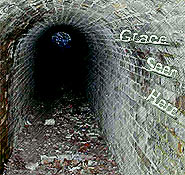 Recently National Public Radio aired a story on Paul Curtis, AKA "Moose," of Leeds, England. It seems that Moose has been defacing public property with graffiti. And to make matters worse, his graffiti bears a commercial message. To date, he has delighted many a train rider and pedestrian with his ads for his own small recording label and such industry giants as Smirnoff Vodka and Hewlett-Packard.

The city council is perplexed over what to do with Moose and his criminal acts of vandalism. It seems that Moose is not actually painting on the tunnel and sidewalk surfaces that have become his canvas. No, indeed, he is merely cleaning selected areas leaving an outline of his message to be read amongst the grime and grit of the urban landscape.

The issue seems to be whether cleaning dirt from public property in Moose's selective manner constitutes vandalism. After all, isn't Moose's scrub down of a wall in the public interest? And is the fact that he cleans only part of the wall a criminal offense?

Apparently, the city officials have even looked into other possible violations. Like whether or not Moose is creating a health hazard by using dangerous cleaning agents. A quick review of Moose's chosen tools presents no avenue to prosecution. Water, a shoe brush, and old rags. That's his entire arsenal. His secret to success — elbow grease.

Moose is a little bewildered by all of this, but hasn't lost his sense of humor. "I'm waiting for the kind of Monty Python court case where exhibit A is a pot of cleaning fluid and exhibit B is a pair of my old socks," he jokes.

What does society do with Paul "Moose" Curtis? Do we ask someone to cease and desist from what is actually a good thing just because of the message it leaves behind?

Few days go by when there is not a report of some group or entity imposing a bold, outright statement against religion. We are frightened by the implications of courts that order the Ten Commandments to be removed from courtrooms and nativity scenes from the town square. We wonder at the forces of evil facing us when anyone would dare to suggest that the words "under God" be removed from our country's Pledge of Allegiance.

Yet we often lose sight of the fact that no one complains when we offer a cup of cold water in Jesus' name. Or feed the hungry. Or clothe the poor. Or train individuals for better jobs. Or work to reconcile those in conflict.

Every small act done in His name, tells the story.
Sometimes we are so upset over what restrictions have been placed on our ability to express our faith that we fail to see those tools that are close by that no one considers to be threatening. Water, shoe brushes, old rags, elbow grease. Cold water, food, clothing, hope, peace.

Christians have been persecuted for years. And some have predicted the death of the church. But as long as this world remains, God will raise up people who leave behind his message with simple elbow grease. A trail of clean tiles on the dingy walls of life. Every small act done in His name, tells the story.

And the contents always exceed the packaging claims.

For if you are willing to suffer for Christ, you have decided to stop sinning. And you won't spend the rest of your life chasing after evil desires, but you will be anxious to do the will of God. You have had enough in the past of the evil things that godless people enjoy — their immorality and lust, their feasting and drunkenness and wild parties, and their terrible worship of idols. Of course, your former friends are very surprised when you no longer join them in the wicked things they do, and they say evil things about you. (1 Peter 4:1-4)

"Elbow Grease" by Joey Cope is licensed under a Creative Commons License. Heartlight encourages you to share this material with others in church bulletins, personal emails, and other non-commercial uses. Please see our Usage Guidelines for more information.