Who said it and why do we think it is true? 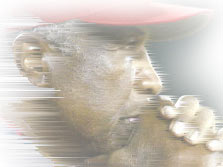 When others are happy, be happy with them. If they are sad, share their sorrow (Romans 12:15 NLT).

According to Jimmy Dugan, manager of an all-female baseball team in the movie A League of Their Own, baseball players don't cry. "Are you crying? Are you crying?" he screams. "There's no crying in baseball!" Who made that rule?

Did you happen to see the post-game interview with Frank Robinson of the Washington Nationals back in the spring? As the team's manager, Robinson had felt compelled to pull his catcher from a game against the Houston Astros in the middle of an inning. The Astros had stolen a record-breaking seven bases on third-string catcher Matt LeCroy. He replaced him with a player who is normally an outfielder. It was painful for Robinson and humiliating for LeCroy, but everyone knew it had to be done to stop the unbelievable string of stolen bases.

In the press-room interview afterwards, Robinson cried as he talked about what had happened. "I feel for him," he said. "And I hope the fans understand. And I just appreciate him hanging in there as long as he did." What was LeCroy's reaction? "If my daddy was managing the team," he said, "I'm sure he would have done the same thing." For myself, I'm pretty sure the "same thing" that day would have been not only to pull his son from the game in order to stay competitive but also to shed honest tears over having to embarrass him so.

Then, lo and behold, cameras were there this summer when no less than the greatest golfer in the world broke into tears. Tiger Woods had played the final round of this year's British Open. He started the day with the lead, seemed the most calm and collected player on the course, and finished with his eleventh win of a PGA major. But there was no trademark fist pump. There were tears instead.

Who made that ridiculous rule?
Still on the 18th green, Woods embraced his caddie and cried on his shoulder. The staid British crowd then watched as he moved to his wife, Elin, and embraced her. And his body shook with sobs as he wept in her arms. Tiger's mentor-father, Earl, wasn't there for the big win. He had died of cancer several weeks before, and this was his son's first tournament win since his death.

Who made that ridiculous "rule" that says big boys don't cry? For that matter, what gives men the right to make fun of females who seem to express their deep emotions more freely? Tears often mean we are human — and care.

"Jesus wept" is the shortest verse in the English Bible (John 11:35). I'm glad it's there. Like Robinson's gentle flow of tears and Tiger's deep sobs, the emotion of the Son of God beside a friend's tomb communicates his passion. That he is one of us. That he cares if something is causing you to weep today.

"Big Boys Don't Cry?" by Rubel Shelly is licensed under a Creative Commons License. Heartlight encourages you to share this material with others in church bulletins, personal emails, and other non-commercial uses. Please see our Usage Guidelines for more information.