Joy and Pain in the Family of God

Could we be so gracious in this awful situation? 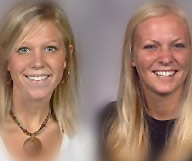 Laura Van Ryn's family spent five weeks sitting by Laura's bedside after a car accident left their daughter, an Indiana college student, in a coma. Her mother, father, sister, and other friends and family spent the time reading to her, talking to her, encouraging her to respond to their voices by moving her fingers or blinking her eyes. They had little time to think of the four other students riding in the van, including Laura's friend Whitney Cerak, who were killed in the crash. While the Cerak family buried their daughter, the Van Ryns prayed and hoped that theirs would come out of her coma.

Then, after a five-week vigil, they got their wish. And then again, they didn't.

The first words Laura Van Ryn spoke when she awoke from her coma were, "My name's not Laura. It's Whitney."

Investigators said the identification of the victims was scattered all over the scene. Whitney and Laura were both blonde, blue-eyed, and looked enough alike that they were mistaken for one another. Enough alike that not even their parents could tell the difference.

A shocking, surprising, horrifying story, to be sure. Can you imagine what it must feel like for a parent to realize that she has been sitting vigil for her daughter while she should have been grieving for her? And can you imagine what it feels like for a parent to realize that the daughter whom he buried is not dead after all? A parent must feel relief to realize that the grief you thought was yours in reality belongs to someone else's parents, somewhere else. Not that you would wish such grief on those other parents, of course, but neither do you want it to be yours. That's often the way it is with what we call joy and pain; it almost seems sometimes that they exist in equal amounts in the world. Someone else's joy is your pain. Your joy is someone else's pain.

One family welcomes their son or daughter home safely from Iraq, while another receives only a casket and the "thanks of a grateful nation." A baby is born into the world, and on the same day a child succumbs to illness or malnutrition or a bullet from a moving car. One man starts his dream job, and another loses his. One couple celebrates another anniversary in a happy, joyful, loving marriage, while another endures one more year of cold looks and hurtful words.

"There is a time for everything," the Bible says, and that includes "a time to weep and a time to laugh, a time to mourn and a time to dance" (Ecclesiastes 3:1, 4). What makes the Van Ryns' and Ceraks' story so terrible and joyful is that they were told that it was time to do the one when it was really time to do the other. In every other way, their experience is like the experience of every person on earth: joy and pain are two sides of life, and most of us experience our fair share of both at one time or another.

There's something else, though, that makes this story so unusual. Shortly after discovering that their daughter was dead and buried, and not recovering from her injuries, Laura Van Ryn's family released this statement:

"It is a sorrow and a joy for us to learn of this turn of events. For us, we will mourn Laura's going home and will greatly miss her compassionate heart and sweetness, while knowing that she is safe and with her king forever. We rejoice [with] the Ceraks, that they will have more time on this earth with their daughter, sister and loved one."

I'm pretty sure, though, that the Van Ryn's statement is pretty much what Paul had in mind when he wrote "rejoice with those who rejoice, mourn with those who mourn." In the midst of their sorrow, while mourning the loss of their daughter, they found the room to rejoice with the Cerak family. In the darkness of their grief, they were still able to see the light of hope and joy and be genuinely glad for someone else's good fortune. Even when it came at their expense.

It's a rare sensitivity that allows us to reach beyond our own joy or our own pain and share someone else's. And yet that's the life we're called to as people who follow Jesus: to mourn when others mourn, to celebrate when others celebrate. In short, Jesus asks us to take ourselves out of the center of our emotional universes.

Can we recognize that, though we have much in our lives to genuinely celebrate, others are not so fortunate? While we celebrate our children's accomplishments in school, can we still feel the pain of the people around us who feel the absence of children and the sharp pangs that graduation celebrations and the accomplishments of school days bring about? When we celebrate a much-deserved promotion or raise, can we also share in the hurt of a person who has been laid off? While we enjoy our standards of living, can we keep in mind the poor who are barely scraping by, if it all? While we luxuriate in our good health, can we help to care for those who live with chronic disease? Can we, in short, resist the tendency of joy to insulate us from the pain of others?

And, on the other hand, can we keep our pain from making us inward-focused? If we feel the ache of loneliness, can we nonetheless celebrate with happy couples sharing their lives together? Can we celebrate a brother or sister's good fortune while struggling in the grip of financial problems? Can we genuinely enjoy a peer's success, despite feeling disappointed that we haven't yet achieved what we'd like to?

There is perhaps no better way to love someone than to genuinely share in his pain or his joy. To do so is to demonstrate beyond a shadow of a doubt — just as Laura Van Ryn's family did — that we have the capacity to be concerned about more than our own condition. It demonstrates that we consider others as important as ourselves.

Maybe that is not natural. But it is certainly what we have experienced in the gospel. Jesus chose to think of and act for our good, not his own. He chose to take our pain on himself, and to rejoice in what God did through his sacrifice. He simply calls us to do what he did: To hurt and celebrate with others, whatever twists our lives might bring.

"Joy and Pain in the Family of God" by Patrick D. Odum is licensed under a Creative Commons License. Heartlight encourages you to share this material with others in church bulletins, personal emails, and other non-commercial uses. Please see our Usage Guidelines for more information.