Who's really in control here? 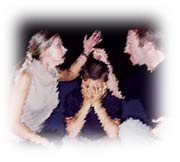 by Joe Beam (05/10/2011) | Together in His Grace
She could not look people in the eye as they greeted her. Head down, shoulders slumped; she headed to the nearest open seat and quietly slid into it. Her husband was a study in contrast. Confident, gregarious, he firmly shook hands and made polite small talk before striding over to sit beside his wife.

Years before she had been a decorated officer in the military. A leader of men and women. Shrinking violets do not earn those positions, so it was obvious the woman in that seat was only a shell of the woman she used to be. When anyone tried talking with her, she clasped her purse to her chest with both arms, glancing up only occasionally. If asked a question, she spoke briefly and timidly.

Yes, but perhaps not in the way you think.

Her husband had never hit her or used his physical presence to intimidate her. No spousal rape or sexual domination. In fact, he had no idea that he abused her at all. He considered himself a good man that would never be so evil as to harm a woman. In fact, he was the type that would go to the defense of any woman being threatened physically.

More than that, he seemed not to notice his wife’s public timidity. His view was that she could hold her own and gave as well, if not better, than she got when they clashed. When she argued with him via email, she was forceful, angry, and articulate. She did the same aloud when they were alone. He held that perception of her to the degree that the behavior others saw seemed not to register with him. He saw a brawling, selfish witch. Others saw a frightened woman drowning in her own lack of confidence and esteem.

When he finally understood that the bulk of their problem was his behavior, he reacted first with anger, then regret, and finally genuine change. Their relationship changed in a matter of three days and the change is still in effect nearly three years later.

People crave respect. They want to be accepted for who they are in reality, rather than having to pretend to meet someone else’s criteria. When treated as an inferior, they react badly. When they feel they have to pretend, living as a picture of what another wants rather than as the person they actually are, they slowly dissolve their own identity. Some become lost and never rediscover who they were. Others deteriorate for a while, but eventually hit a point of frustration that leads to defiance, anger, and rebellion. Yet others live between those extremes.

Picture the lion or tiger in a cage snarling and slapping at the tamer making them jump through hoops and put on a show. They show their anger, but ultimately comply because they do not wish to receive punishment, and they enjoy receiving reward. The award is not equal to the freedom they once had, but over time they submit themselves to captivity and the morsels handed by the one who controls them. The whip hurts; the morsels are tasty; compliance results. At least for some of the big cats. Others likely never yield to the control of the tamer. Maybe others do for a while, but finally have enough and fight back.

Though the illustration may miss the mark a place or two in actual lion taming, the idea makes clear how some marriages or relationships work. One person (man or woman) tries to make the other do, think, or feel a certain way, rather than accepting the natural differences that exist in individuals.

If their partner does not act as they wish, they bring about some type of punishment. It does not have to be physical. It can be emotional, mental, financial, sexual, or more. When the other person complies, a morsel of enjoyment comes their way, perhaps by the opposite of the method used to punish. For example, a woman may try to control her husband by withholding sexual favor when he does not do as she wishes, and giving him sexual pleasure when he does. A man may try to control his wife by controlling the finances in the home, punishing and rewarding based on whether she ignores or complies with his wishes.

The control may apply to more than action. Some individuals bicker and argue until their lover gives in and agrees to some point of thought. They think they won the argument; the yielding lover did not give in, they gave up. Ending the pain of the argument became more important than defending their thoughts or beliefs. The controlling spouse feels good that the other finally saw the light. The controlled spouse feels resentment.

Who Is the Controller?

One reason that controlling people often claim that they are controlled is that when they do not get what they want, they blame the other person. If he wants more lovemaking and she does not provide it, he views her as controlling him through sex and that may be the case. However, the difference in one who really is a controller and one who is being controlled is whether one allows the other to be who he or she truly is.

In the story that began this article, the husband controlled. He had so beaten his wife down with his arguing, intensity, and sense of self-righteousness that she had long since come to believe herself invalid. The reason they came to us for help was that she had finally reached a point of absolute rebellion. That is why she fought so hard in emails and when just the two of them were alone. However, her sense of inferiority developed from being corrected, cajoled, and coerced over the years made her doubt herself. Therefore, in public, she was a docile, fearful individual who could not look other people in the eye. She could fight him in private because she was full of resentment, but inside she feared that she really was inferior. Because of that low self-esteem, if there was anyone else in the room, she cowered. She was terrified that others would validate his superiority and her inferiority.

He felt she controlled because she had reached the point where she would react with anger rather than yielding. He did not get what he had always gotten when he overpowered her with his intensity of argument. That change angered him. When she fought back, though in private, he was convinced that no one could be married to a shrew such as her.

Overpowering another person is in essence a form of slavery.
Two things happened to help him understand that he was the controller and not his wife.

First, other people in their marriage workshop reached out to her and validated her as a human being with value and worth. They accepted her as she was. Perhaps that was the first time she had had such direct validation in years. It gave her strength. Strength turned her anger into confidence and resolve. With great self-control, she calmly informed him the last day of the crisis marriage workshop that she would not tolerate being treated as inferior ever again. He would treat her as an equal or he would live without her in his world.

Second, one of the leaders of our workshop finally got through to the husband what he was doing. It is fine to have an opinion: It is not fine to force it on her. It is okay to want her to feel certain emotions: However, he had to accept that her feelings belonged to her, not him. He had no right to try to control what she felt. In the same way, he had no right to control any of her life. Overpowering another person by personality, intensity, argumentation, or any other means is in essence a form of slavery. Words and behaviors can be just as frightening as chains and whips.

What Should a Controlled Person Do?

Additionally, if one is truly being manipulated or controlled, that person has to make a decision that he or she will no longer live under those conditions. Anger will not solve the problem. Calm strength can. Therapy or counseling may be required. Almost certainly there must be a strong support group. Many find that through my LovePath 911 weekend for marriages in crisis. The couple in the story at the beginning of this article did.

Lastly, if someone is being physically controlled (violence, abuse, or similar), that person must seek professional intervention before any confrontation with the controller. Many cities have hotlines for abused people. If a person does not know where to find help, a talk with a caring physician or a call to the police can lead to the right resources.

"Stop Controlling Me!" by Joe Beam is licensed under a Creative Commons License. Heartlight encourages you to share this material with others in church bulletins, personal emails, and other non-commercial uses. Please see our Usage Guidelines for more information.