A Hands-on Sort of Guy

Are you a hands-on kind of person? 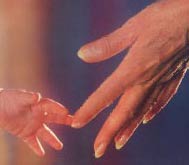 by Russ Lawson (05/18/2006) | Leading in Hope
Well, the grandson is keeping life interesting as usual. Let me set the stage for the latest event. Christopher is a very affectionate little boy, but on his own terms. It's not at all unusual for him to run up to you when you least expect it and hug you or give you a kiss. He likes to snuggle up to you and be held, especially when he is tired. Much of the time though he just either doesn't have time for you to show affection to him or he is not in the mood. I guess it's a stage he is going through right now, he will usually allow a hug, but with a firm reminder of "No Kissing"!

We all smile and laugh about it because we know that will all change in the not too distant future. There will be a time when we will joke about how he shows affection to some young woman!

Isn't it wonderful though how we have a savior who was and is "a hands-on kind of Guy"? The first scripture that popped into my mind was Matthew 8:1-3. Notice what happened in these verses:

Large crowds followed Jesus as he came down the mountainside. Suddenly, a man with leprosy approached Jesus. He knelt before him, worshiping.
"Lord," the man said, "if you want to, you can make me well again."
Jesus touched him. "I want to," he said. "Be healed!" And instantly the leprosy disappeared. (NLT)

Here we see a picture of a "hands-on Savior." Lepers knew what it was like to be avoided. No one wanted to touch them, much less be near them. They were terrible to look at, many times smelled of rotting flesh, and were to warn others that they were unclean. This was Old Testament law. Under that law, they were not even allowed to get within six feet of other people. No one hugged them, shook their hands, kissed them good morning or good night. They truly lived in a world of loneliness.

They truly lived in a world of loneliness.
I don't think it was just an accident that Jesus chose to touch that man; I think it was part of what the man needed to be completely healed — healed, not just in body, but his spirit as well. He went from being untouchable to being touchable in an instant. Suddenly, a man with no hope began to have hope ... hope of hugging his wife and children, hope of kissing them good night, and hope of tucking them into bed. He went from a life of having no friends, to a life of having friends and neighbors. He went from having no life to being able to live again. Do you think he ever forgot that moment or the man named Jesus who touched him and then healed him?

It's the same thing for us isn't it? Sin has touched everyone of us in the world and made us unclean and untouchable. "For all have sinned, and fall short of the glory of God," Paul tells us (Romans 3:23).

You may be "a hands-off kind of person," but aren't you glad that our Savior is not? Do you remember the oft quoted verse that begins, "For God So Loved the world that ..."? Do you remember what comes next? The verse continues, "... he gave his only Son." Why? Because he loved the unlovable and is willing to touch the untouchable! You see, those unlovable and untouchable folks are you and me — condemned by sin and freed by the Savior's loving touch.

How about reaching out and touching someone for God in return for what he has done for you!

"A Hands-on Sort of Guy" by Russ Lawson is licensed under a Creative Commons License. Heartlight encourages you to share this material with others in church bulletins, personal emails, and other non-commercial uses. Please see our Usage Guidelines for more information.