The Guts to Not Fight Back!

Do you have this kind of courage? 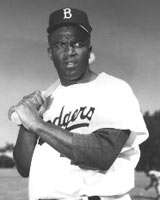 by Alan Smith (06/14/2006) | Just for Men
In researching the story of Jackie Robinson, I ran across some information about him that I had never heard before. I want to share with you some excerpts from an ESPN article by Larry Schwartz.

"A life is not important," Jackie said, "except in the impact it has on other lives."

By that standard, few people — and no athlete — this century has impacted more lives. Robinson lit the torch and passed it on to several generations of African-American athletes. While the Brooklyn Dodgers infielder didn't make a nation color blind, he at least made it more color friendly.

And he accomplished this feat by going against his natural instincts. ... That's what Robinson had to do when Dodgers president Branch Rickey selected him to become the first African-American to play in the majors this century. Rickey wanted a man who could restrain himself from responding to the ugliness of the racial hatred that was certain to come.

A shorthand version of their fateful conversation in August 1945:

Rickey: "I know you're a good ballplayer. What I don't know is whether you have the guts."

Robinson: "Mr. Rickey, are you looking for a Negro who is afraid to fight back?"

Rickey, exploding: "Robinson, I'm looking for a ballplayer with guts enough not to fight back."

Robinson learned how to exercise self-control — to answer insults, violence and injustice with silence. A model of unselfish team play, he earned the respect of his teammates and, eventually, the opposition.

"For it is commendable if a man bears up under the pain of unjust suffering because he is conscious of God. But how is it to your credit if you receive a beating for doing wrong and endure it? But if you suffer for doing good and you endure it, this is commendable before God. To this you were called, because Christ suffered for you, leaving you an example, that you should follow in his steps. 'He committed no sin, and no deceit was found in his mouth.' When they hurled their insults at him, he did not retaliate; when he suffered, he made no threats. Instead, he entrusted himself to him who judges justly." (1 Peter 2:19-23 NIV)

Do you have enough guts NOT to fight back?

"The Guts to Not Fight Back!" by Alan Smith is licensed under a Creative Commons License. Heartlight encourages you to share this material with others in church bulletins, personal emails, and other non-commercial uses. Please see our Usage Guidelines for more information.