The Ministry of Motherhood

What greater need when it is lacking and what greater blessing when present? 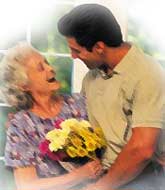 by Rick Atchley (05/07/2006) | Together in His Grace
I've seen her in every congregation where I have ever preached. She usually sits at the back of the auditorium. She is accompanied by two or three young children, but no other adult. She attempts to sing or listen to the sermon, but most of her time is spent just trying to keep her kids quiet. Coloring books and Cheerios spend much more time in her hands than the Bible.

If this wasn't frustrating enough, she has to endure countless gazes from those around her who have forgotten how their own kids behaved, and are now terribly "distracted" by hers. When the assembly is dismissed, she looks exhausted more than uplifted. She trudges with her troops back to the car, and wonders if it was worth it.

To many, she and her children were a nuisance. To me, she is among the grandest of all saints. Before you take another look at her, read on.

You are probably aware that the only family Paul ever mentions are his brothers and sisters in Christ. He never married. He never had kids. Yet there was one who was a son in the faith to him, and as dear as anyone he ever knew. That young man's name was Timothy.

Paul met him on his second missionary journey when he returned to the town of Lystra. In that little band of saints, there was an elderly sister and her daughter. Though both were Jews, the daughter had married a gentile man who apparently had never converted to the Christian faith. (Acts 16:1-3) To this marriage a son had been born, and through the influence of these two ladies, he became a Christian. The brothers in Lystra spoke well of him, and an immediate bond was established between Timothy and Paul.

This young man, Timothy, apparently filled a void in the apostle's heart that had been there since John Mark's departure. Later Paul would write: "I have no one else like him ... Timothy, has proved himself because as a son with his father he has served with me in the work of the gospel." (Philippians 2:20-22 NIV) It is not surprising, then, that the last letter Paul ever wrote that became Scripture was to Timothy. It might be surprising, though, to learn that some of Paul's last words to his son in the faith were to remind Timothy of the ministry of his mother! What had this grand lady done? First, she had instilled in her son a respect for the scriptures.

But as for you, continue in what you have learned and have become convinced of, because you know those from whom you learned it, and how from infancy you have known the holy Scriptures, which are able to make you wise for salvation through faith in Christ Jesus. (2 Timothy 3:14-15)

First, notice that Timothy's exposure to Scripture began when he was a very young child.

The first thing Timothy learned about was God. Paul reminded Timothy of that and of "those from whom you learned it," namely his mother and grandmother. Eunice and Lois did not take those early years for granted. They shared the faith of their people so this young lad would have the moorings he would need as he grew up in a predominantly pagan environment. Surely, this training prepared Timothy well for the first time he heard the gospel, and motivated him to accept Jesus as both Messiah and Lord.

Second, this great lady instilled in her son an authentic faith.

I have been reminded of your sincere faith, which first lived in your grandmother Lois and in your mother Eunice, and I am persuaded, now lives in you also. (2 Timothy 1:5)

Faith is not hereditary — it is learned. And so Eunice was not just a mother; she was a model. She understood that it would not be enough for her young son to read about faith from a scroll. He needed to see faith lived out in a life.

The word Paul uses to describe Timothy's faith as being sincere literally means "non-hypocritical," and Paul adds that this same quality of faith lived in his mother Eunice. In other words, her love for God and his will was not phony. It was genuine to the core, and Timothy picked up on that. After all, no one knows better whether a parent's Christianity is authentic than the children. Timothy saw something sincere in his mother that was appealing.

Third, this godly woman must have instilled in her son a desire to minister.

Apparently, Timothy eagerly accepted Paul's invitation to travel with him and be trained on the mission field. He had already been doing some preaching in the area. Even the fact that Paul had been stoned and left for dead the last time he had come through town did not deter the young man from answering the call. Now how can that kind of commitment to ministry develop, if it has been discouraged at home?

Faith is not hereditary — it is learned.
Could that be the reason why the number of young people among us who want to enter the ministry is in decline? Yet there was a woman who loved her son enough to share the Scriptures and her faith with him, and loved God enough to let him go when the call came. Ask any mother of a missionary if that is easy. When Timothy left Lystra it is probable that he never made it back. It is significant that Eunice is never addressed in any of Paul's letters. No doubt tears filled her eyes as she watched her boy walk out of town. But how her heart soared as she witnessed the fulfillment of what she had prayed and prepared for since before he could crawl.

Fourth, and finally, perhaps the most amazing thing about this wonderful sister is that she did all of these things for her son with no encouragement from her husband.

That is not to say that Timothy's father was a bad man. He may have been a good man in many ways, but he left no spiritual deposit on his boy. That is not how God meant for it to be, but in that home, and in millions since, that is the way it was. Nevertheless, Paul found in the young man a deep sensitivity to spiritual things. Never underestimate the influence of a godly mother.

Now take another look at that woman mentioned at the first of this article. Does she need your glares and frowns? Does she need more discouragement? Or, could she not instead use some support, some respect, some appreciation? It bothers me that all some church folks seem concerned about with such a woman is how to keep her kids quiet. It seems to me that we need to ask how we can help that sister hang in there when it doesn't even seem worth it, and how the church can assist her in making a spiritual deposit in those kids in the absence of a father who will do so.

Perhaps I empathize with these ladies more than most. I should, for I owe my salvation to one. You see, my grandmother was one of those women who dragged her two boys to church Sunday after Sunday by herself. At my birth, she was the only one of my grandparents who was a Christian. Yet her influence upon my father was profound, and I enjoyed the tremendous blessing of being raised in a Christian home.

Today I'm blessed to serve with a great church and have been afforded the privilege of addressing saints across the nation. My grandmother, on the other hand, served the Lord in an inconspicuous way in central Texas. She is not well known, she has received no honorary doctorates, her name has never appeared in any major publication, yet I want you to know that I would not be a Christian today, much less a preacher, if it were not for the stubborn faith of Ona Atchley. (By the way, her husband, my grandfather later did accept Christ and became an elder and served the Church. Godly wives can have great influence, too.)

So, take special care of those ladies who sit at the back of the auditorium. That little boy beside her could be the next Timothy. I wonder who will be his Paul?

Reprinted from Image Magazine, Vol. 3 — No. 14; September 1987 with special thanks to Howard Publishing Company.

"The Ministry of Motherhood" by Rick Atchley is licensed under a Creative Commons License. Heartlight encourages you to share this material with others in church bulletins, personal emails, and other non-commercial uses. Please see our Usage Guidelines for more information.

Rick Atchley is preaching minister for Richland Hills Church of Christ and much sought out speaker and author. (Visit the Author's Website)