How frequently are you affirming your kid? 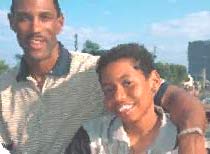 by Paul Faulkner (04/21/2006) | Making Life Work for Your Family
To bless another ... to encourage another ... well, these are some of the most important facets of life. Biblical examples abound. In the early church, Christians washed each other's feet, they laid hands tenderly on one another, and they practiced the "holy kiss." In Jesus' famous story about lost sons and a loving father, when the prodigal son returned home, his father ran to him, through his arms around him and hugged and kissed him!

Five to one. That's what the researchers say. And I'll bet you that the hugs and kisses do more for him than the spanks.

So why not make the rest of the day a little better? Give your kid a hug — no, let's make that five hugs — today!

"Five to One" by Paul Faulkner is licensed under a Creative Commons License. Heartlight encourages you to share this material with others in church bulletins, personal emails, and other non-commercial uses. Please see our Usage Guidelines for more information.