The New Year and The Blood of The Lamb

Can we learn to center on what is most important? 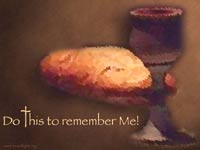 by Bill Sherrill (01/01/2005) | Special Features
The New Year for the Children of Israel began while they were still slaves in Egypt. God spoke to Moses and gave him the message. "This month shall be the beginning of months for you; it is to be the first month of the year to you." (Exodus 12:2) It was still fourteen days until the terrible night of the Passover. On the tenth day they were to set aside a lamb which was perfect and without flaws. On the fourteenth they were to slay the lamb, use its blood as a marker on their door posts and prepare the lamb for the feast. On that dreadful night, death would strike the first born of both man and beast. Only those protected by the "blood of the lamb" would be spared.

When Jesus of Nazareth was eating His last Passover Feast with the disciples, He gave true meaning to the memorial. He would become The Passover Lamb. His blood would be the protecting sign for all who would trust it to save them from the night of destruction. In the memorial we call the Lord’s Supper, we are reminded — much like the Israelites were by the Passover — that God has spared us because of His great love. We have been set free from our slavery to sin and are protected by the Blood of the Lamb.

In the years that passed after that first awesome Passover night in Egypt, the fathers rehearsed over and over again the things which they had witnessed. The story was to be told year after year to help the descendants realize the great gift which was given to them.

Unfortunately, the story had less and less impact on many listeners over the passing of many years, until it was little more than a "folk tale" for many of God's people, simply told as a part of tradition. What had been reality to one generation became a faint memory to the next and then little more than a holiday to those who followed.

I would suspect the Lord’s Supper did not survive much better. As the Apostles told the story, there was a deep sense of reality, respect, and remembrance. However, as The Supper was passed down through many generations, it came to mean less and less.

Today, as one participates in The Supper, our wonderfully tragic yet glorious reminder of Jesus' gift of grace, it is easy to forget the reality. We need to touch the Cross once more, to see the suffering body from which flowed that redeeming blood, and to have our hearts broken as we realize our sins were the burden He carried to that cross.

It is easy to forget the reality.
We are redeemed, but what a price was paid for our redemption! As Israel began their first "New Year" with the celebration of the blood of the lamb, perhaps we might begin our new year with a sense of awe reenforced by The Supper on the first day of the week. One could not truly keep the Passover unless he or she felt it — in fact, Israelites were to experience and relive God's deliverance not just recall it. Nor can one keep the Lord’s Supper with a shallow heart and eyes unstained with tears of grief and joy!.

So as we begin this New Year, let's do so with a commitment to remember and honor our Lord who gives us the grace to start new and fresh!

So from now on we regard no one from a worldly point of view. Though we once regarded Christ in this way, we do so no longer. Therefore, if anyone is in Christ, he is a new creation; the old has gone, the new has come! All this is from God, who reconciled us to himself through Christ and gave us the ministry of reconciliation: that God was reconciling the world to himself in Christ, not counting men's sins against them. And he has committed to us the message of reconciliation. We are therefore Christ's ambassadors, as though God were making his appeal through us. We implore you on Christ's behalf: Be reconciled to God. God made him who had no sin to be sin for us, so that in him we might become the righteousness of God. (2 Corinthians 5:17-21)

"The New Year and The Blood of The Lamb" by Bill Sherrill is licensed under a Creative Commons License. Heartlight encourages you to share this material with others in church bulletins, personal emails, and other non-commercial uses. Please see our Usage Guidelines for more information.

Our Brutal World
Life is a dangerous endeavor. We pass our days in the shadows of ominous realities.

ToGather: God Made Known to Us (July 25, 2021)
God promises to be with us and in us so that we can experience his love for us!

The Lord Is Near!
We are not alone in our longing to know that the presence of the Lord is with us!

Our Brutal World
Life is a dangerous endeavor. We pass our days in the shadows of ominous realities.

There in the Deep End
Yesterday, in practice, she was the only one who did it. Why was she so afraid today?

Inheritance Day
Melancholy or anticipation? We are part of a great cycle of inheriting from our grandparents and parents as well as passing on to our children and grandchildren