What happens when the strom won't let up? 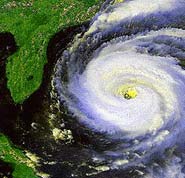 by Mike Barres (09/28/2004) | Special Features
We have had so many hurricanes and storms this year. The sound and fury of the storms wear on you after awhile. Life has its storms, too. The storms of life can really wear on us, as well. However, the manner we respond to these storms can be a powerful witness.

Sometimes the Lord calms the storms that rage in our lives.

Then He [Jesus] arose and rebuked the wind, and said to the sea, "Peace, be still!" And the wind ceased and there was a great calm. (Mark 4:39)

I love it when God does that, but sometimes He doesn't remove the storm.

Recently we were studying about the early Christian servant named Stephen. (Acts 6:1-8:8) Stephen was not described as a weak, faithless person, but as a strong Christian with faith, wisdom, and spiritual power. In the midst of persecution, the way that he handled the storm became a witness and an inspiration to others. God's anointing on his life did not result in deliverance from the storm — except in the ultimate way; through death. This is sometimes hard for us to accept, but God allows the storm in our lives for his glory. The key focus, however, is the witness of Stephen's life:

Pray that the Lord will help you to be a witness.
And Stephen, full of faith and power, did great wonders and signs among the people. ... And all who sat in the council, looking steadfastly at him, saw his face as the face of an angel. ... and they cast him out of the city and stoned him. And the witnesses laid down their clothes at the feet of a young man named Saul. And they stoned Stephen as he was calling on God and saying, "Lord Jesus, receive my spirit." Then he knelt down and cried out with a loud voice, "Lord, do not charge them with this sin." And when he had said this, he fell asleep. (Acts 6:8;  Acts 6:15;  Acts 7:58-60 NKJV)

The way Stephen kept his eyes on Jesus in this storm was a testimony of faith to Saul — who at this point was persecuting Christians, but would later become the great missionary to the Gentiles telling the story of Christ.

The way that we demonstrate the fruit of the Spirit in difficult times today can also be a most powerful witness to those around us. Anyone can be joyful and peaceful when things are going well, but it is supernatural to have love, joy, peace, patience, kindness, goodness, faithfulness, gentleness and self control when you are in the middle of one of life's raging storms. (cf. Galatians 5:22-23)

When you find yourself in a storm, by all means pray that the Lord will remove it. If He doesn't, pray that the Lord will help you to be a witness to those around you in the middle of the storm. We don’t want to be guilty of being fair weather Christians. In the midst of a storm, we certainly hope that God will glorify Himself through us by the way we handle our storms.

"Handling Life's Storms" by Mike Barres is licensed under a Creative Commons License. Heartlight encourages you to share this material with others in church bulletins, personal emails, and other non-commercial uses. Please see our Usage Guidelines for more information.