A Penny Saved is a Lesson Learned

How can an old penny teach a life lesson? 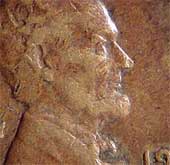 by Russ Lawson (09/23/2004) | A Taste of Home
Perhaps you have heard the saying, "A penny saved is a penny earned." Sometimes a penny can be even more than that, as our little three-year-old grand nephew, Mason, found out not long ago.

Mason's parents and grandparents had noticed that he had not been eating as well as he normally did, but really didn't think much of it. Kids go through different stages where that happens, so that wasn't really anything too unusual. At least it wasn't too unusual until he started complaining that his chest hurt and then he began coughing up blood. To say the least, that got their attention!

A very fast trip to the emergency room at Children's Hospital and a bunch of tests revealed that Mason had something lodged in his throat. When the procedure that removed the object was completed, they discovered that the object was a penny. The doctors said it had apparently been there for some time due to the condition of the penny and his throat.

Now Mason has learned a very valuable lesson about putting things in his mouth. He even warns his 15 month old sister about placing things in her mouth. He definitely doesn't want to have to go through that mess again.

I wonder why we as adults don't learn as quickly as young Mason did? It's not like we don't know right from wrong, is it? Why, then, do we insist on repeatedly doing things that we know are wrong or that will hurt us?

The apostle Peter had this to say about this:

And when people escape from the wicked ways of the world by learning about our Lord and Savior Jesus Christ and then get tangled up with sin and become its slave again, they are worse off than before. It would be better if they had never known the right way to live than to know it and then reject the holy commandments that were given to them. They make these proverbs come true: "A dog returns to its vomit," and "A washed pig returns to the mud." (2 Peter 2:20-22)

I wonder why we as adults don't learn as quickly.
That's not a new thought; a thousand years or so before that, Solomon wrote in Proverbs 26:11, "As a dog returns to its vomit, so a fool repeats his folly."

Let me ask you this, "If a three year old knows what hurts him and tries to avoid it, why don't we?"

My prayer is that God will give us wisdom to overcome Satan and his influence over us.

"A Penny Saved is a Lesson Learned" by Russ Lawson is licensed under a Creative Commons License. Heartlight encourages you to share this material with others in church bulletins, personal emails, and other non-commercial uses. Please see our Usage Guidelines for more information.