How can we make sense of something this awful? 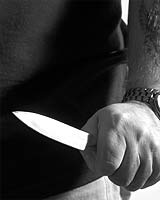 They were filled with all manner of wickedness, evil ... they are ... foolish, faithless, heartless, ruthless (Romans 1:29-31 RSV).

Much of the news in Chicago the past couple of weeks has revolved around the investigation and arrest of Christopher Vaughn, who allegedly pulled his Ford Expedition off the road in a Chicago suburb a little before 5:30 a.m. on June 14th in order to shoot and kill his wife and three children. Such a horrific crime has sent shock waves through a city that sees its share of murders. Even journalists who report on terrible atrocities on a regular basis are searching for "whys" for this one.

One of those journalists is Eric Zorn, a regular columnist for the "Chicago Tribune." In his June 26 editorial, Zorn admits that he "can't stop thinking about" the "unthinkable" murders that Vaughn is accused of committing. Zorn describes the murders, if they occurred as prosecutors believe they did, as "a betrayal of love, trust, decency, and biological imperative so complete it redefines the standards of everyday evil." He goes on:

Christopher Vaughn, 32, allegedly took the lives that most fathers would unquestioningly give their lives to save. Such an inverted, unnatural act seems to set the world spinning backward. It taxes even the most jaded imagination.

Zorn's characterization is right on, isn't it? The crime of which Vaughn is accused would be an "inverted, unnatural act." It's hardwired into parents to protect their children, isn't it? To do something, anything, to hurt them is impossible to imagine. And yet, however rarely, too often we see it. In his column, Zorn asks out loud the question this crime naturally makes us all want to ask: "What force was strong enough to pull that trigger against the resistance of nature itself?"

What force? We talk about mental illness, and yet that doesn't quite cover this, does it? It's hard to explain it away as sickness, or personality disorder, or even selfishness; we all know sick people, people with personality disorders, or selfish people who do no such thing. Wanting to ask the question is natural enough, but for all our intelligence and sophistication we don't have the vocabulary to actually answer it.

For the vocabulary we need, we have to look beyond ourselves.

How about these words?

Not enough? How about these?

Those are all words from  Romans 1, where the Bible paints a lurid portrait of the human condition in garish colors. They don't quite do it, though, in this situation, do they? Those words all describe the act, but they still fall well short of explaining it.

God went to the trouble to remind us.
How about one more word?

At the risk of oversimplifying a horrible crime, that's really our problem, isn't it? Godlessness. Not the kind of godlessness that comes from ignorance. It isn't, unfortunately, that we don't know God at all. Our real problem is that, though we have every reason to know him and worship him as our Creator, we don't. We just don't.

What often passes for worship among us, Paul writes, is directed at created things — including ourselves (Romans 1:18-25). Think Adam and Eve in the Garden, worshipping a serpent's promises, a piece of fruit, and in the end their own impulses and desires. Godlessness: "[A]lthough they knew God they neither glorified him as God nor gave thanks to him." And the result? Predictable. "Their thinking became futile and their foolish hearts were darkened."

Though only a few of us, thankfully, are actually capable of an atrocity like this, the fact that some of us apparently are demonstrates how fallen human beings really are — how broken by sin are our hearts, how twisted by evil our thoughts. We wind up hurting the people we should love most, in one way or another. Though we're capable of great compassion, we're equally as capable of coldness and selfishness. Though we can and sometimes do think of others, we're just as likely to think of ourselves. Though we can show self-discipline, it seems we're never too far from greedily gobbling up as much as we can of whatever we happen to want.

Call it Sin, if you want, that force that gave Christopher Vaughn the ability to allegedly pull that trigger. But don't call it that to absolve him of responsibility. Attribute the act to the Devil, if you like, but not in order to say that he made the shooter do it. In the end, the trouble in all our lives, the thing that causes havoc and pain and disorder and sadness, is that we forget we are creatures and then forget our Creator.

So God went to the trouble to remind us.

He reminded us by becoming one of us in Jesus and dying for us. Then Father raised Son to life in the power of the Holy Spirit and invited us to share that new life. In that new life, we're no longer under sin's power. We're free to offer ourselves to God in gratitude for his grace, free to be his children and to share in the inheritance he has for us. We're able to break out of the world's way of life, transformed by minds that he has renewed, to acknowledge our Creator by offering ourselves to him in worship. And we're able to treat each other with something that more closely approaches the love we receive from him.

In a world where family ties don't necessarily mean what they should, in Jesus we can learn to love even those who seem far away and very different as if they were family. That's just one way that he's redeemed our fallenness and repaired our brokenness. That's not to say that we don't struggle with the same sins and shortcomings, the same sometimes inexplicable evil that plagues every other human being. But we are not left at its mercy. In Christ, a world that sometimes seems to be spinning backward is put to right again.

So instead of asking what force caused Christopher Vaughn to allegedly do this terrible thing, or what force causes us to do the terrible things we sometimes still do, we're free to ask other questions. Like, "How am I living out the new reality that Jesus has brought about in my life? In what ways do I still need to die to sin?" And, maybe most importantly, "In what ways am I offering the only sacrifice that will adequately express my gratitude to God ... myself?"

"Explaining the Unexplainable" by Patrick D. Odum is licensed under a Creative Commons License. Heartlight encourages you to share this material with others in church bulletins, personal emails, and other non-commercial uses. Please see our Usage Guidelines for more information.