Underestimating the Pull of Evil

How strong is the pull in your life? 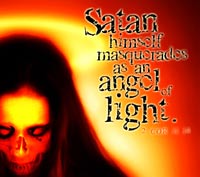 [Special Note: This article will also run today in Portuguese on our partner site iluminalma in the Vida em Cristo section and in our Spanish partner, la luz del alma.]

In the past you were dead because you sinned and fought against God. You followed the ways of this world and obeyed the devil. He rules the world, and his spirit has power over everyone who doesn't obey God. (Ephesians 2:1-2 CEV)A team of Jews who were traveling from town to town casting out evil spirits tried to use the name of the Lord Jesus. The incantation they used was this: "I command you by Jesus, whom Paul preaches, to come out!" Seven sons of Sceva, a leading priest, were doing this. But when they tried it on a man possessed by an evil spirit, the spirit replied, "I know Jesus, and I know Paul. But who are you?" And he leaped on them and attacked them with such violence that they fled from the house, naked and badly injured.
The story of what happened spread quickly all through Ephesus, to Jews and Greeks alike. A solemn fear descended on the city, and the name of the Lord Jesus was greatly honored. Many who became believers confessed their sinful practices. A number of them who had been practicing magic brought their incantation books and burned them at a public bonfire. The value of the books was several million dollars. So the message about the Lord spread widely and had a powerful effect. (Acts 19:13-20 NLT)

They had to make a choice about their allegiances.

We live in a day that discounts the power of evil. Our world can talk about it when people fly planes into skyscrapers killing thousands or when they blow themselves up on subways, busses, and beside mosques killing and maiming dozens. Those clear acts of evil are readily and publicly denounced. Somehow, however, we suffer an unfortunate and dangerous disconnect in the Christian community between sin and evil. We have opted for the modernist preacher's definition of sin — "missing the mark" — and separated sin from the power of evil and lure of the evil one - the point of view and grave concern of the New Testament witnesses.

When was the last time you heard a preacher seriously talk to Christians and warn them the way the Holy Spirit does in the book of Hebrews?

Take care, brethren, lest there be in any of you an evil, unbelieving heart, leading you to fall away from the living God. But exhort one another every day, as long as it is called "today," that none of you may be hardened by the deceitfulness of sin. For we share in Christ, if only we hold our first confidence firm to the end .... (Hebrews 3:12-14)

Grace was given to us to rescue us from this power, not to give us a free pass to piddle with sin and become entrapped by Satan's power once again. Jude reminds us about this distortion when he says:

Some godless people have wormed their way in among you, saying that God's forgiveness allows us to live immoral lives. The fate of such people was determined long ago, for they have turned against our only Master and Lord, Jesus Christ. (Jude 1:4)

Peter's words to early Christians are intentionally harsh and ugly because God wanted to shock them away from playing with the darkness and its false allure:

When they learned about our Lord and Savior Jesus Christ, they escaped from the filthy things of this world. But they are again caught up and controlled by these filthy things, and now they are in worse shape than they were at first. They would have been better off if they had never known about the right way. Even after they knew what was right, they turned their backs on the holy commandments that they were given. What happened to them is just like the true saying, "A dog will come back to lick up its own vomit. A pig that has been washed will roll in the mud." (2 Peter 2:20-22 CEV)

There are really only two sides in the battle for the souls of men and women: you obey God or you belong to the evil one. (Ephesians 1:1-2) The evil one exerts a great deal of effort to distort that truth and muddle people's minds about this clear choice. (2 Corinthians 11:14;  John 8:43-44) However, his intent for those that belong to him is made clear in  Mark 5. See what evil powers had done to this man: he had completely lost his identity and his life to Satan. We know him only as Legion — not his real name, but his identity as one controlled by Satan. He was isolated from others, injured himself, was incredibly strong by evil's power, and lived a hideous life in the place of the dead. (Mark 5:1-9) The memory of this man was not lost on the apostle Peter, who later warned Christians, "Be careful! Watch out for attacks from the Devil, your great enemy. He prowls around like a roaring lion, looking for some victim to devour." (1 Peter 5:8 NLT)

When people first came to Christ in Ephesus, they were taught that they had to make a choice about their allegiances — it was either God or Satan. Paul wrote to warn them that to go back and dabble in sin was to open the door to Satan in their life. He reminds both them and us that God has made us for something far better; "For we are God's masterpiece. He has created us anew in Christ Jesus, so that we can do the good things he planned for us long ago." (Ephesians 2:10 NLT) We have the power to resist Satan's attacks and temptations in our lives, (James 4:7;  Ephesians 1:18-20;  Ephesians 3:14-21) but we must realize that to seek that power means we know that piddling with sin makes us an enemy of God. (James 4:4) We understand that we are in a real struggle; a war with unseen and vicious powers. (Ephesians 6:10-12)

Let's realize that when we face temptations we are in a war. It is a battle for our souls between heaven and hell.

Let's commit to the Lord that we won't piddle, dabble, or play with sin because we don't want to have anything to do with honoring the evil one.

Let's be honest with ourselves about our hearts, and let's call ourselves away from a lifestyle that seeks to "play in the gray" and see how close we can come to sin without actually committing the act of sin. Sin is far more than missing the mark; it is offering our heart to the evil one and inviting him into our world to exercise his power and his control.

"Underestimating the Pull of Evil" by Phil Ware is licensed under a Creative Commons License. Heartlight encourages you to share this material with others in church bulletins, personal emails, and other non-commercial uses. Please see our Usage Guidelines for more information.