What spiritual lessons can be learned from the President and NASCAR? 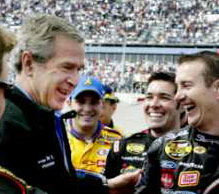 by Melva Cooper (02/18/2004) | Special Features
It seems only days since NASCAR Cup Champion Matt Kenseth, Jimmie Johnson, Ryan Newman, Dale, Jr., and other drivers were having their picture made with the President of our United States on the lawn of the White House.

Sunday, before a crowd of 200,000, plus millions more fans watching on television, President Bush was seen posing with the NASCAR drivers again. This time it was on the drivers’ home turf. And none other than the famous Daytona International Speedway.

Veterans Richard Petty and Bill Ellliott were spotted visiting with the President. NASCAR officials greeted and welcomed him to Daytona and the 500 race. All five branches of our military anxiously awaited their turn with the President.

And then, one of the most delightful circumstances this race fan had ever seen unfolded before my eyes. President Bush, with a smile on his face, gathered with the 43 drivers to shake their hand and chat a few minutes.

The bright flames of Jeff Gordon’s firesuit, the orange of Home Depot driver Tony Stewart, and the black and gold, Matt Kenseth, DeWalt colors were all highly visible. From the champions of our favorite sport to the President of the United States, surrounded by security agents and red, white, and blue flags, it was a sight to behold!

The Presidential motorcade took a slow half-lap around the flat side of the Daytona Speedway. As the singing of the National Anthem came to a close, the loud roar of a stealth bomber could be heard overhead. It was probably one of the best days ever as a driver or fan to attend the Daytona 500. The most excellent in NASCAR and in our nation gathered together for this exciting event.

Thank you, Mr. President, for bringing this time of joy to the drivers and fans. It was the ultimate in earthly racing! That moment was a glorious time with President and Mrs. Bush. But, his time was limited to a couple of hours and then Air Force One lifted off and headed to another part of our nation.

Jesus never has to leave. His omnipresence is always with us. If the race goes the scheduled four to five hours or runs into a long rain delay, he hovers over and around. Making Himself, at all times, available when we considerately submit a request or send a resounding cry to Him for help.

The Daytona 500 is always a special day for NASCAR race fans. Maybe more so this year than some of the others. But, it has come and gone. As we all anxiously await for another year and another race, let us put our trust in Jesus who was here yesterday, will be here tomorrow and when race day comes again.

This article was originally published on www.catchfence.com.

© Melva Cooper. This article originally appeared in the Just a Minute inspirational email and is reprinted here with their kind permission.

"The President Visits Daytona" by Melva Cooper is licensed under a Creative Commons License. Heartlight encourages you to share this material with others in church bulletins, personal emails, and other non-commercial uses. Please see our Usage Guidelines for more information.

Melva Cooper is a member of the Just a Minute writing team. (Visit the Author's Website)