Dodging Our Own Explosions

How do we get out of the way of our own explosions? 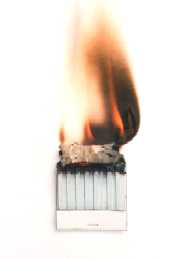 I know, GOD, that mere mortals can't run their own lives, That men and women don't have what it takes to take charge of life. So correct us, GOD, as you see best. (Jeremiah 10:23 The Message)

The frigid Croatian winter was making itself felt, and Zlatko Grdn discovered to his frustration one morning recently that his car was its victim. Nothing he did to coax the engine to life worked. It had surrendered to the cold, and Zlatko soon realized that until he could somehow thaw the engine out, his car was nothing but a very expensive lawn ornament. But how to thaw out a car engine, outside, in bitterly cold conditions?

I have no idea how long it took him to come up with the solution that gave him his fifteen minutes of fame. I don't know if he had a sudden flash of inspiration or made a methodical, logical decision. I do know that however long he took to think up a way to thaw his engine, it wasn't long enough. Perhaps if he'd taken a little longer, he wouldn't have built the fire.

Right. A fire. To thaw his car engine.

Zlatko's solution involved stuffing old newspapers under the car's frozen engine and then lighting them. You can see his thought process, can't you? Fire equals warmth equals thawed engine. You can probably predict what happened. Fortunately, Zlatko had apparently drifted some distance from the car and wasn't hurt when the car erupted in what must have been a spectacular fireball. On the bright side, I imagine the explosion thawed the engine. I'm sure it was nice and warm when it landed on his front porch or dining room table or wherever it finally settled.

Zlatko, as you might expect, was interviewed by local media. I love his statement: "I couldn't start the engine and realized it was frozen. I decided to warm it up. Now my lovely car is destroyed". Notice how he didn't mention the part about stuffing the engine compartment with burning newspapers. As if he was the victim of a completely random, unforeseeable circumstance. But he's not, is he? Everybody knows, Zlatko probably included, that he's really the victim of his own bad decision.

Now while we're quite uncharitably snickering over Zlatko's misstep, it might be good for us to look in the mirror. So you've never stuffed flaming newspapers under a car's hood to thaw a frozen engine? Congratulations. Have your words ever added fuel to the fire of a friend's anger? Ever stoked the already hot flames of your sexuality with pornography and lust? Have you ever used food or drugs or shopping or sex to numb pain? Ever lied to avoid the consequences of a mistake?

I hope you're not standing too close when it explodes and your lovely whatever is destroyed.

Every one of us, like Zlatko, has had our best plans blow up in our faces. We usually don't do wrong just for the sake of doing wrong. Most of the time we convince ourselves on some level that wrong will work. Or not just work — we usually convince ourselves that doing wrong, at least this one particular thing that a lot of people would call wrong, is really the best course of action.

We probably know that in a lot of circumstances lying is going to go explosively wrong. But somehow, when the plans we make include lying, we always believe we're going to be safe. We know we shouldn't long for what others have, and yet we find ourselves buying stuff just because someone else has it. And then we're surprised at the fireball of greed and financial troubles that rips our lives apart. A student thinks cheating is the best way to solve his lack of preparation, only to have his academic career blow apart at the seams when the professor catches him in the act. An addict thinks one more hit off the pipe is the best way to deal with the trouble and loneliness in his life, and then his heart explodes and his last thought is "What happened?"

See what the prophet meant? "Mere mortals can't run their own lives ... men and women don't have what it takes to take charge of life."

Oh, we don't like that, not a bit, but do any of us have any grounds for arguing against Jeremiah's conclusion? Are we humans really smarter than we used to be? Maybe. Do we know more about our universe? Undoubtedly. Are we more technologically advanced? Without question. But are we any more capable than the first man and woman God ever made of choosing our own paths, directing our own journeys? Well, let's see.

We still hate and kill those we can't understand. We still ignore as irrelevant what we can't experience with our five senses. We still sacrifice all to our drives, urges, and ambitions, still disregard our Creator, still try to make our worlds conform to our personal agendas. Oh, I suppose we've created some plans that worked, sure. Still, it seems human history is just one "bozo" after another causing one explosion after another. We're not victims of random circumstance. We're more often than not hurt when our own plans blow up in our faces.

"Correct us, God, as you see best." That's what will save us from ourselves. When our lips recite that prayer, when it throbs in our hearts, when our lives are built around it, then our steps will be sure and our decisions sound. When we invite God to tinker around under the hood, trust him to remove this, install that, and bypass this other thing, then we'll run like we're created to run. When we stop fearing his correction like willful children wanting our own ways at any cost and start welcoming it as an expression of his love, we'll at last be the happy, secure people we've always wanted to be. But not until then. Not until then.

Continue with YOUR plans, if you want to. Don't let me talk you out of it. By all means, go ahead and continue to be in charge. As you wish. God has given you that freedom. But, be ready to duck and cover, because it's hard to predict where the next explosion will come ... but be assured, it's coming. And you never know whether or not the next one will take your head off. Or when it'll take an innocent bystander with you.

Let that be your mantra, your motto, you slogan. Better yet, let it be your prayer. Invite God into your life and trust him to calibrate your compass and lead your journey. Trust him to get you started.

So correct me, LORD, but please be gentle. Do not correct me in anger, for I would die. (Jeremiah 10:24)

"Dodging Our Own Explosions" by Patrick D. Odum is licensed under a Creative Commons License. Heartlight encourages you to share this material with others in church bulletins, personal emails, and other non-commercial uses. Please see our Usage Guidelines for more information.