More than Meets the Eye

Exhausted, bone-weary, and insufficient to meet the task at hand? Ah, you may just be in the place where Jesus can use you most powerfully! 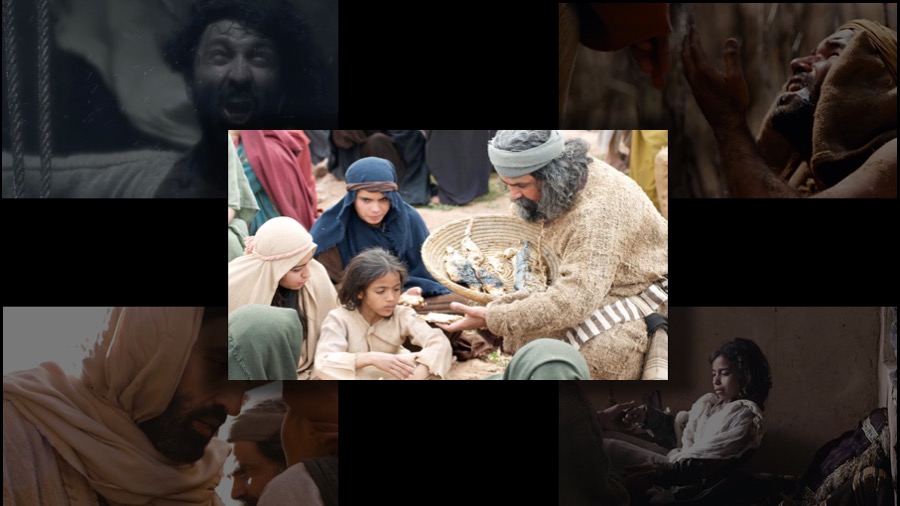 by Phil Ware (08/22/2017) | The Jesus Window
As we join Jesus in his ministry, he is back on track with his power miracles. He's doing amazing things, impossible things, now that he is out of Nazareth (Mark 6:1-6). Before Nazareth, the Lord had:

In today's passage (Mark 6:30-44), we join him as he feeds a crowd of 5,000 — one of the favorite stories in the gospels and one of the few miracles recorded in all four of them (Matthew, Mark, Luke, and John). Look closely, because more is going on than meets the eye!

Jesus' apostles were filled with joyous excitement along with a deep sense of holy accomplishment. They gave Jesus a great report of all that they had done and taught on the ministry mission he had sent them to complete (Mark 6:30; cf. Mark 6:7-13). Like many of us after a great spiritual effort, they were completely exhausted. When their initial excitement dissipated and the reports of their accomplishments were complete, they were bone-weary. Also, John the Baptizer, Jesus' cousin and forerunner, had been executed by Herod (Mark 6:14-29). Jesus needed to grieve the murder of John along with several of his apostles who had been John's disciples. Jesus urged them to get away with him and get some rest (Mark 6:31-32).

They got into a boat and sailed to the other side of the Sea of Galilee. When they landed, a huge crowd was waiting for them. The crowds had beaten them to the landing place and were waiting and needy. Instead of rest, Jesus and his apostles faced a surging mass of deep need — more people wanting attention, more people with diseases, more people needing far more than the apostles thought they could provide. Jesus' disciples also realized that the day was about over, the mob was huge, they were in a remote place, and they didn't have the resources to meet the many needs of the hour.

Out of concern and compassion for the crowd, the apostles urged the Lord, "Send them away!"

Instead, Jesus looked at them, then said, "You feed them!" 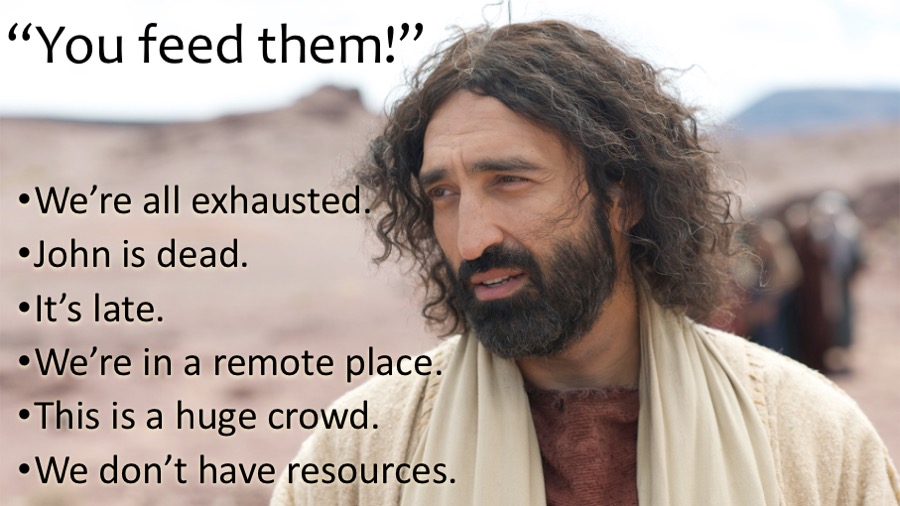 You're kidding us, right?

"How many loaves do you have?" Jesus asked them.

"Five — and two fish," they answered.

The truth of the matter, the apostles were almost right. All they had were five loaves, two fishes... and Jesus! Yes, they had Jesus! They had forgotten to figure Jesus into the equation!

Jesus told the apostles to arrange the crowd into groups of hundreds and fifties — yes that's how we know how many there were in the crowd. Then, the Lord took the five loaves and two fish. He blessed them. He broke the bread. He had them distribute the food. They did. Everyone ate. They didn't just get a taste or a snack, but everyone was satisfied!

Jesus then sent his bone-weary buddies back after the miracle to do something mundane, routine, and boring. He told the apostles to clean-up what was left. This assignment, however, is where the reality of the miracle fully dawned on the Lord's disciples. Jesus' twelve loose lug nuts, his twelve exhausted apostles, looked down at what they were holding in their hands: a basket full of leftovers. Each held Jesus' miracle in their hands!

So, what are we to do with this story about Jesus, his apostles, and the huge crowd?

If we let it, this story can speak directly to our circumstances:

Most of us confronting such challenging ministry "opportunities" are not thinking, "This is great! We're in the perfect position to see the Lord put his miracle into our hands!" Like Jesus' apostles before the feeding of the five thousand, we forget we have Jesus! 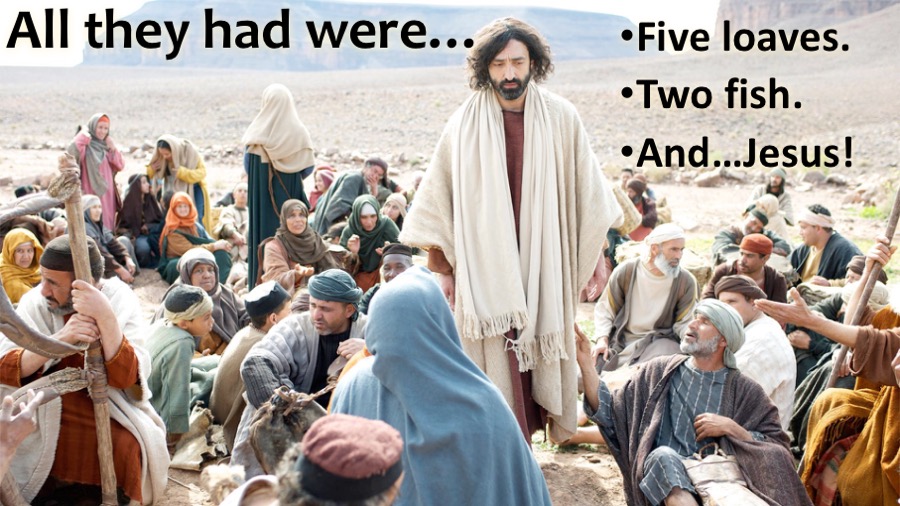 Our current circumstances may put us precisely where we need to be: dependent on the Lord to be strong because we are not up to the task at hand. If the Lord's work is going to get done in these circumstances, Jesus is going to have to pull it off because we can't. We're not good enough. We're not big enough. We don't have the resources needed to meet the needs.

Remember the amazing story of Gideon?

God's people had done evil and had been given into the hands of their oppressors, the Midianites. They cried to God for deliverance (Judges 6:1-10). God appeared to Gideon and called him to lead the people to victory. Gideon reminded the LORD that he was the youngest kid in the least clan of the least tribe of Israel (Judges 6:11-13).

Do we believe that with our meager resources, Jesus can make them more than enough?

The Lord turned to him and said, "Go in the strength you have and save Israel out of Midian's hand. Am I not sending you?" (Judges 6:14).

As Gideon's story unfolds, God reminded him again and again that the power for deliverance belonged to the LORD. The release of that power depended upon Gideon's willingness to trust in the LORD, not in his own strength, numbers, or resources (Judges 7:1-25).

"Go in the strength you have..." Gideon did. God gave him a great victory despite overwhelming odds. Like the twelve apostles, Gideon needed to remember the challenge was to trust in the LORD. All other distractions, calculations, logistics, and resources were secondary.

The LORD longs for us to hold the miracle in our hands. He longs for us to experience his power and his provision instead of feeling defeated by our lack of resources. But, do we believe? 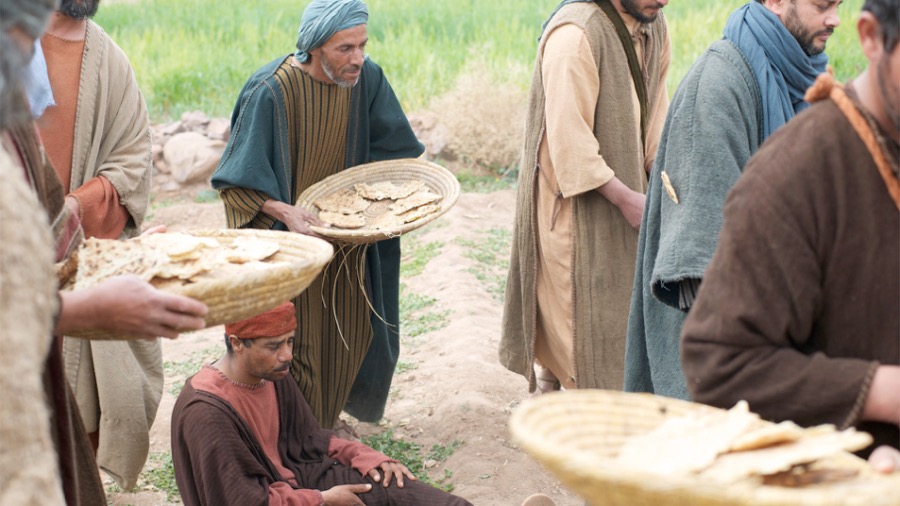 Unfortunately, many of us leave this story to our children. That way we don't have to decide if we truly believe they happened. We also miss out on the wonder that comes with seeing God do exceptional things in the face of our great obstacles. We need this story far more than our kids do! It's powerful. It teaches us to have child-like trust.

But, do we trust?

Do we believe God?

Do we believe that even in our weariness the LORD can sustain and use us?

Do we believe that with our meager resources, Jesus can make them more than enough?

Do we believe the LORD's promise?

Very truly I tell you, whoever believes in me will do the works I have been doing, and they will do even greater things than these, because I am going to the Father (John 14:12).

Do we believe that with Jesus, we always have more than meets the eye? 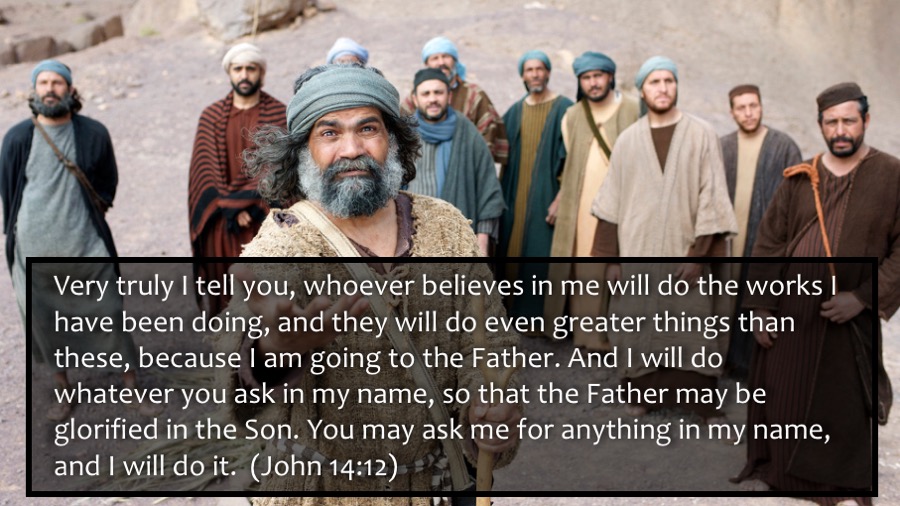 "More than Meets the Eye" by Phil Ware is licensed under a Creative Commons License. Heartlight encourages you to share this material with others in church bulletins, personal emails, and other non-commercial uses. Please see our Usage Guidelines for more information.