Riders in the Storm

What do we do the calm vanishes and we're caught in the storm? 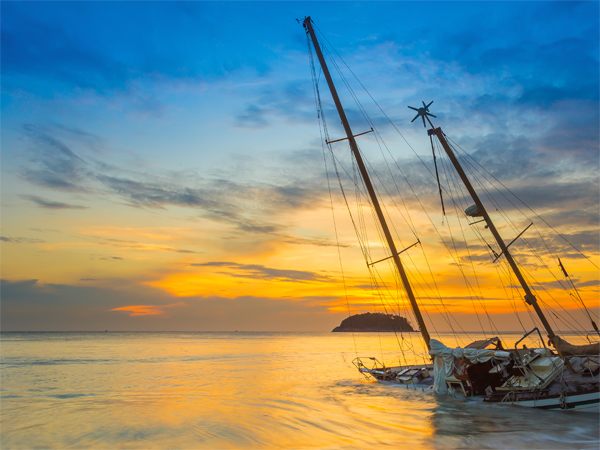 This post appeared over a decade ago, but Rubel Shelly's recent piece, "Calm in the Midst of Chaos," brought it to mind. It is offered as a companion study to go with Rubel's article and in preparation for a series called "Saved at Sea" which will begin in a few weeks.

For once, I was excited to go see my doctor. Headed into my yearly physical, I had dropped about 25 pounds from the year before. I felt great. I couldn't wait to hear what my friend and doc had to tell me. A little friendly bragging about my accomplishment over the last year was ahead and I couldn't wait. ... At least I thought I couldn't wait!

My doc said, "Hey Phil, you look great. How did you lose the weight?"

I explained. We shared some chitchat. Then, while looking at my neck and feeling my lymph nodes, he asked, "So... what is that?" About that time he punched around at the bottom of my neck in the little soft spot. I flinched as a twinge of pain shot through me. Then he said, "Oh wow, there are three of them!"

Certainly, this was not what I had come to the doctor expecting to hear!

I had three small masses at the base of my neck near or on my thyroid. He could see them when he looked closely. He could touch, poke, and explore them with his fingers. I could feel a sizzle of pain each time he poked on any of the three.

I went from feeling proud and great to feeling startled and worried. In a matter of minutes, I had gone from sailing in the bright sunshine on a steady soft breeze to finding myself in the middle of a storm... a potentially deadly storm.

To be honest, I don't remember anything else about the results of that physical exam except for the end of the discussion and the beginning of a season of testing, scoping, and waiting.

My doc said, "These feel perfectly round, so I'm hopeful they are simply cysts."

Then I asked the ultimately dumb but irresistible question: "So... if they are not cysts, what else could they be?"

Not a good question! Certainly not a question my friend would answer with dark speculation.

The sky was the limit on "what else could they be?" We both knew what I was really asking. I was a public speaker. The cysts were near my vocal chords and at the base of my thyroid. For anyone, this would be a scare. For someone who spoke as his primary livelihood, well, let's just say everything was up for grabs in my heart! Then there were other worries... let's call them terminal worries. I was a dad with kids to get through school and raise to follow Jesus.

The doc's answer to my ultimately dumb but irresistible question was evasive. To be honest, the answer was better than if he had given me the long list of possibilities for "what else could they be?"

"Let's not speculate at this point. I am going to schedule you for an ultrasound. Then we'll do a thyroid nuclear x-ray. These cysts are small and feel perfectly round, so I'm not all that worried about them; I think they might even go away on their own. That's what I'm hoping, anyway."

I trusted my friend. I believed that he was probably right — everything in me wanted him to be right! Yet I couldn't help but hear the echo of this collection of words fill my heart with uncertainty. I tossed and turned several nights before I began a series of tests and received the results.

My friend was right, and God was gracious.

There have been many other storms in my life since that doctor's visit. Nearly all of them have turned out well when I finished riding out the storm and reached the calm waters on the other side of the thunder, lightning, wind, and waves. In all of these storms, I can thankfully say...

My friends were right, and God was gracious.

Yet every year that passes, I am reminded that sooner or later, one of these storms will have me wash up on another shore. But then, the calm of those waters promise something far greater than a doctor's hopes or my own wishes for my health.

All of us who find ourselves as mortal bags of bones, blood, and skin have to be riders on the storm at different moments in our lives. The real issue in those moments is what we allow our focus to become during the storm.

What sounds do we hear and what sights capture our gaze?

What do we do when fear overwhelms us and we've grown tired of fighting the storm?

How do we know if Jesus is with us when we can't see him and it appears he is far from us?

The early followers of Jesus faced storms like we do. Their storms may have even been worse than most of us have faced. For them, an event in the life of Jesus was told and re-told to help them find comfort and keep faith in their storms.

Immediately Jesus made the disciples get into the boat and go on ahead of him to the other side, while he dismissed the crowd. After he had dismissed them, he went up on a mountainside by himself to pray. When evening came, he was there alone, but the boat was already a considerable distance from land, buffeted by the waves because the wind was against it.

But Jesus immediately said to them: "Take courage! It is I. Don't be afraid."

Then Peter got down out of the boat, walked on the water and came toward Jesus. But when he saw the wind, he was afraid and, beginning to sink, cried out, "Lord, save me!"

And when they climbed into the boat, the wind died down. Then those who were in the boat worshiped him, saying, "Truly you are the Son of God?"

What made this story so powerful to Jesus' early followers was that Jesus had just demonstrated in the feeding of the 5,000 that if his followers would bring him their limited resources and their inability to deal with big problems, then he would make them more than sufficient to face the challenge (Matthew 14:13-21). Like us, they often forgot and lost their focus and sometimes, momentarily, their confidence in their faith. Like us, they could listen more to the wind, and they could see nothing but the rolling waves. The foreboding conditions allowed them to forget the loving concern of their friend, Jesus — the only one who had the power to come to them during the storm and then bring them to safety out of the storm.

At some time in each of our lives, we are going to find ourselves as riders in the storm. How are we going to handle this time? Let's think about the following questions. In fact, interact with the Facebook® comment section below. Your favorite passages, your testimony of strength could just be what someone else needs to keep on keeping on.

In a few weeks, I will begin a short little series entitled "Saved at Sea" that will look at a number of the more famous storm stories from Scripture. But for now, let's begin by thinking about these questions and our own times in the storm. Then, we will have our collective experience to fall back on and to share with others who are "Riders in the Storm"!

My prayer for you is that this story from Jesus' life will become more than just a story for you. I pray it will become a truth that shapes your future as you face your storms and seek to follow Jesus!

"Riders in the Storm" by Phil Ware is licensed under a Creative Commons License. Heartlight encourages you to share this material with others in church bulletins, personal emails, and other non-commercial uses. Please see our Usage Guidelines for more information.