Far from isolationism, we are called to 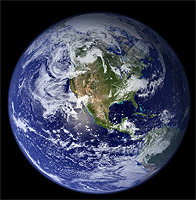 by Phil Ware (08/12/2014) | Two Minute Meditations
As a young teenager, I remember watching TV on the afternoon of July 20, 1969, when Apollo 11 landed on the moon. Then six hours later, Neil Armstrong first stepped onto the lunar surface. The world felt so big and the moon, our closest neighbor, felt so far away. The scratchy voice announced each accomplishment.

"Houston, the eagle has landed!"

"One small step for man, one giant leap for mankind."

Those scratchy sounds along with the fuzzy pictures and awkward movements reinforced my impressions that I lived in a big world and an even bigger universe.

Then, incredible pictures began to surface from the face of the moon. These pictures showed the earth, the place I called home, a beautiful, but tiny, blue planet. It looked like a small blue ball suspended in a snow globe of stars. Suddenly, my world felt small, tiny, and fragile.

This small blue planet was the world I came to know as I passed through my teenage years.

Russia was supposed to be far away. I had seen Russia on the Risk game board. Yet Russia and America were not distant enemies, but close combatants. This realization pulled at the fabric of my sense of security. People in my boyhood Texas coastal town seriously weighed the advantages and disadvantages of bomb shelters during the growing Cuban missile crisis.

Then I spent my teenage years hearing about body counts and watching the wounded and dead on nightly national news. I couldn't help but notice as older boys from my area didn't come home. I also realized that their families were never the same. Then I began to notice that many who came home were deeply affected by their experiences in a place called Viet Nam that was supposed to be far away, but now seemed incredibly near.

Shuttle launches and disasters reinforced the interconnectedness of the world I knew. Watching "shock and awe" occurring thousands of miles away, yet fully displayed on my TV screen, made the world seem even smaller. Then came the video of the smoking Tower and the plane flying into the other tower on 9-11. These images were surreal. They felt like a video game, yet I knew lives were ending, others being ripped apart, and families across the street and down the block worried about their own who were involved — their own who had been home only a few minutes, hours, or days earlier.

As I write this, I am sitting on an airplane. It is Sunday afternoon. I am flying home, connected to the world by the Internet, covering thousands of miles in a few hours, so I can hug my wife and sleep in my own bed tonight. This, of course, will happen after spending time with people who are precious to me in a place far from my home.

Earlier today over lunch, these precious people talked about friends and relatives in China, Thailand, Peru, Honduras, Nigeria, Uganda, and places strung all over the United States. One lady talked about taking her grandmother home to China so she could pass from this life in the place she was born. I talked about two Chinese daughters in the faith that live in different cities in Thailand. One talked about a recent visit to Viet Nam and some private peace that was made between ordinary people whose nations had once been at war. We talked about possible medical mission trips to South America and also to Africa. We talked about different people we know from all over the world, and about a family who had lived in China for years that was in the process of moving to Tucson. These conversations reminded me once again that we live on a small and interconnected blue planet.

My life with Heartlight.org and VerseoftheDay.com and aYearwithJesus.com has been blessed with connections all over the world — hundreds of thousands of people a day in 175 countries and in ten languages. In the last year, I received an email early one Sunday from our translator in Pakistan asking us to pray for those severely injured and killed in a terrorist bombing at a large Christian church that morning — I heard before CNN or FOXnews knew. This special disciple's message was one of concern for those who had lost loved ones and the children and women who had lost limbs. But his message was one of grace:

We don't hate these terrorists. But we do ask that they can be like Saul who hated Christians, but then became Paul, and gave his life to tell others about Jesus.

Since that call, I've been blessed to hear young adults confess Christ as Lord and baptize thems into Jesus in Thailand and Peru as well as several from Bhutan and Nepal who live in Texas. I've seen the transcript of a 23 year old young woman confessing Christ who lives somewhere in Iraq and who asked if she had to tell her parents — she was willing to do so, but knew if she did her uncle would kill her in an "honor killing." The person who chatted with her, told her, "No, the Lord will give the sign and the time to make your loyalty known, but now is not the time." I watched as a friend who baptized three of the young girls abducted by Boko Haram in Abuja, Nigeria, talk about them and other families he knew who had lost daughters. These young girls weren't in some place on the other side of the world, they were in his heart and in the tears in the corner of his eyes in west Texas. Our world is not such a big place!

When the Lord called me to follow him, he didn't call me to try to be safe, to keep away from those who are different, and to stay isolated from the rest of the world.
Over the last few weeks, the atrocities against believers in Jesus in Nigeria, Syria, Pakistan, Iraq, Egypt, Iran, and a host of other places have impacted my heart. The Ebola infection of Dr. Kent Brantley in Liberia has tugged at something deep inside me because I know this precious family and I know, love, and even worked with Amber Brantley's parents since college. People I know, who went to Liberia because others were desperate for even the most minimalist health care. While there, they treated another friend who grew sick on an African trip and saved his life. Also while there, Ebola broke out. The world is not so big after all.

As I have also listened in amazement at the overwhelming silence of the American press about the atrocities against Christians, I was angered. But, more than frustrated and angry with the press, I have become deeply concerned. There is a wave of isolationism in the air. There is a naïve sense that we can retreat to the "safety" of our own country. Ironically, I've wondered to myself, hasn't anybody been to a major U.S. city lately and worried about the violence? Haven't they seen the poverty in our own streets and country sides, places in too many places to list? Haven't they looked at traffic deaths listed on on our highway signs? Safety is a matter of perception and determination, not a matter of reality.

Yet the temptation, the wave of public opinion, seems to be that the solution is to lock everyone else out and prevent anyone from returning home who might be infected or different from us or who cares to make a difference in our dangerous world. In a world connected by the Internet, international plane travel, international commerce, and multi-national families, such thinking is not only naïve, it is dangerous. Yet for us as believers, it is much worse than dangerous. It is heretical.

I'm not smart enough to figure out our immigration issues or national policies about such things. I'm not talking about that. I don't know any more about containing global pandemics than a lot of the self-appointed celebrity "experts" that have shown their ignorance over the last several weeks. But I do know this: Jesus didn't call me to be an isolationist. When the Lord called me to follow him, he didn't call me to try to be safe, to keep away from those who are different, and to stay isolated from the rest of the world.

Jesus' parting command right after his claim to all authority was clear: "Go!" (Matthew 28:18-19). And that "Go!" was not only to go to our own people, our own neighborhood, our own city, our own region, our own state, and even our own nation. Tt was "Go!" to "the end of the earth" (Acts 1:8 ESV). It wasn't just about going to people who are like us — or even people who like us — but a "Go!" to "all nations" (Matthew 28:19; Luke 24:47). In fact, Jesus made clear that our going had to be more than the safe going through media — video, internet, email, and video-conferencing. While all these are effective tools, Jesus sent us to minister like he was sent by the Father. This means incarnational going — going from where we are and going to and entering into the world of others (John 20:21).

We live on a small blue planet. We are interconnected in many ways as citizens of planet earth. But we — you and I — are citizens of more than this planet; we are citizens of the Kingdom of God. Our daily prayers are for this Kingdom to come and for our Lord's will to be done on this tiny blue planet just as it is in heaven (Matthew 6:10). To pray such a prayer is also to commit to such a purpose! This is the Kingdom we seek to bring that will not be ruled by power and intimidation, but tended by grace. This is the Kingdom not threatened by intimidation and fear, but is moved by the love that saved us (Romans 5:6-11) and now calls us to reach others who need that same grace. As Paul said it long ago, "The love of Christ compels us..." (2 Corinthians 5:14 NIV).

"Interconnected Grace" by Phil Ware is licensed under a Creative Commons License. Heartlight encourages you to share this material with others in church bulletins, personal emails, and other non-commercial uses. Please see our Usage Guidelines for more information.