Not what any of us wants in our obituary! 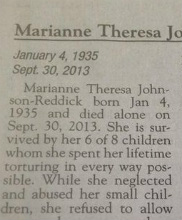 This is an interesting and powerful article that should be read, pondered, and eventually acted upon. I recently spent a week with over 800 children in Peru, many of whom have had such a mom as described below. Having a precious child in our own extended family that found shelter in a Christian home after having such a parent, I will offer an end note to suggest a redemptive way or two for us to "act upon" this message.

I only know Ken Herman through his column in the Austin American-Statesman. He is an engaging and entertaining writer, but at times his column is so weird I want to do some fact-checking to be sure he's not just making up stuff.

My interest was piqued a few months ago when his column began:

I've joked for a long time that among the reasons to be nice to your kids is that they'll pick the nursing home you'll be in and you're always in jeopardy of winding up in Bedsore Manor, where a "60 Minutes" crew will drop by to ask questions like "Have they fed you this year?"

I chuckled on cue but my laughter died as I continued to read:

Here's another reason... to be nice to your kids: There's a good chance they'll write your obituary.

Then he quoted from an obituary that said a woman is survived by the "children whom she spent her lifetime torturing in every way possible."

Thinking Herman had gone too far this time, I found the obituary on-line as it appeared in the Reno Gazette-Journal. I use the names only because they have been published in numerous places, and the people have attested in interviews that they did indeed write these words:

Marianne Theresa Johnson-Reddick [was] born Jan. 4, 1935 and died alone on Sept. 30, 2013 [correct date is Aug. 30]. She is survived by 6 of her 8 children whom she spent her lifetime torturing in every way possible. While she neglected and abused her small children, she refused to allow anyone else to care or show compassion towards them. When they became adults she stalked and tortured anyone they dared to love. Everyone she met, adult or child was tortured by her cruelty and exposure to violence, criminal activity, vulgarity, and hatred of the gentle or kind human spirit.

On behalf of her children whom she so abrasively exposed to her evil and violent life, we celebrate her passing from this earth and hope she lives in the afterlife reliving each gesture of violence, cruelty, and shame that she delivered on her children. Her surviving children will now live the rest of their lives with the peace of knowing their nightmare finally has some form of closure.

Most of us have found peace in helping those who have been exposed to child abuse and hope this message of her final passing can revive our message that abusing children is unforgiveable, shameless, and should not be tolerated in a "humane society." Our greatest wish now, is to stimulate a national movement that mandates a purposeful and dedicated war against child abuse in the United States of America.

Wow! A daughter and a son have confirmed that they submitted this paid obituary to the Reno newspaper, and that it represents the feelings of their siblings.

Not knowing the people or their circumstances, I can't do anything but accept the testimony as sadly accurate. At least the children survived to tell their story rather than being drowned, or shot, or left to die in an oven-like car.

Patrick Reddick, the son who co-authored the obituary, said he and his sister told their story to focus on child abuse, and they were surprised when it went viral and they heard from people all over the world. "Even people who weren't abused said they went home and hugged their children and said how much they loved them. And they told their mom, 'Thank you for being a good mom.'"

Noting that "It's hard to even imagine that there are uncaring, abusive parents," Herman was reminded of a prayer written by Rabbi Robert Saks of the Washington, D. C. area. The prayer is offered "in memory of a parent who was hurtful..." and asks God "to subdue my bitter emotions that do me no good...."

To Ken Herman I say, "I apologize for daring to doubt your column's accuracy." And to my children I say, "Please, spare me the obit, and spare me the prayer."

The prayer is offered "in memory of a parent who was hurtful... " and asks God "to subdue my bitter emotions that do me no good...."
The wounds on a child by an abusive parent are deep and leave caustic residue. Can that residue be removed? Yes! Can the wounds heal? Yes! But the reality is that the wounds shouldn't occur and the caustic residue shouldn't be deposited. None of us can help every child, but we all can help at least one. Here are some ways to get you thinking about "acting upon" today's message with redemptive action:

Are there other things to do? Absolutely. If you want to share some, use the Facebook® comments box below. But let's do more than get worked up about wounded, abandoned, abused, and forgotten children. Let's hear the voice of Jesus:

People were bringing little children to Jesus for him to place his hands on them, but the disciples rebuked them. When Jesus saw this, he was indignant. He said to them, "Let the little children come to me, and do not hinder them, for the kingdom of God belongs to such as these. Truly I tell you, anyone who will not receive the kingdom of God like a little child will never enter it." And he took the children in his arms, placed his hands on them and blessed them (Mark 10:13-16). 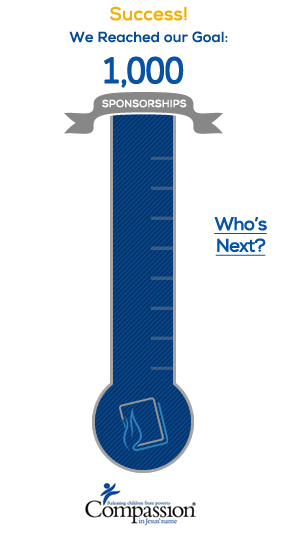 "Tortured!" by Phillip Morrison is licensed under a Creative Commons License. Heartlight encourages you to share this material with others in church bulletins, personal emails, and other non-commercial uses. Please see our Usage Guidelines for more information.