The Year of Our Lord

His coming divided the history of the world into two parts 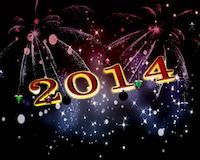 by Tim Archer (01/01/2014) | Hope for Life
His coming divided history into two parts: before his time and after his time. The Western world marks the years as B.C. (before Christ) and A.D. ("anno domini," Latin for "the year of our Lord"). Some use C.E., meaning "common era," but the years are still counted from the time when he came.

This new year is 2014 A.D. The calculations are probably off by a few years, but the meaning is still clear: two thousand years ago, something happened that was so important that everything else is measured in relation to that event.

John, the writer of the fourth book of the New Testament, describes it this way: "The Word became flesh" (John 1:14). The Word, the unique Son of God who was with God and was God and created everything… that Word became a human being. And nothing has been the same since.

Just as his coming marks a division in history, so his person brings everyone to a choice. We believe in him and accept him as Lord. Or we reject him as a fraud. There is no middle ground, no waffling talk of him being a great teacher or a prophet. John writes:

He was in the world, and though the world was made through him, the world did not recognize him. He came to that which was his own, but his own did not receive him. Yet to all who received him, to those who believed in his name, he gave the right to become children of God— children born not of natural descent, nor of human decision or a husband's will, but born of God (John 1:10-13).

Every man's life is divided into "Before Christ" and "After Christ." We come to know of him, we learn about him, then we decide. We decide to reject him and all that he stands for. Or we believe in him, and receive all that he has to offer.

Every man's life is divided into "Before Christ" and "After Christ."
It's a new year. It's the right time for making a decision. Make this year a true "year of our Lord."

Discuss your choice with us at www.hopeforlife.org or write to me at tarcher@heraldoftruth.org .

"The Year of Our Lord" by Tim Archer is licensed under a Creative Commons License. Heartlight encourages you to share this material with others in church bulletins, personal emails, and other non-commercial uses. Please see our Usage Guidelines for more information.