Honoring vows made more than a half century before 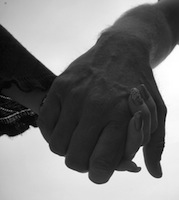 by Bill Brant (09/25/2013) | Hope for Life
57 years earlier they stood before a minister and repeated the vows, their vows, to each other. "For better or worse, for richer or poorer, in sickness and in health, 'til death do us part."

During the course of their life together they were partners: in the home, at work, at church, almost always together. In fact, when people talked about them it was always "BillandJean" as if it were one word.

He knew that he would die first because of the heart surgeries and related medical issues.

But five years ago that began to change. There were the hip replacement surgeries, the falls, the hospital stays that seemed to be longer each time, the numerous trips to the ER, sleepless nights, the washing of bedding after the "accidents." She grew increasingly frailer, almost blind, and finally two years ago, because he wasn't physically able to lift her, he placed her in a nursing home. Every day he made the 40 mile round trip to spend the day with her. Even on Sundays when he asked others to cover his responsibilities at his church. He told people that "taking care of Jean is the most important thing I do."

The final two months were almost overwhelming and each day he drove to see her. Now totally blind and her mind viewing things from her childhood, she would cry out: "Daddy? Daddy where are you?" And he would hold her hand, caress it, and speak to her. While she no longer recognized him, his voice was able to calm her. His world was his house and her nursing home room. He knew that he was losing her a little more each day.

Jean died around 7 am on Monday morning.

I was honored to be asked to help with her funeral. While her body was still present, we all knew that Jean wasn't there but was claiming the promise that Paul talked about in 2 Timothy 4:8: "Finally, there is laid up for me the crown of righteousness which the Lord, the righteous Judge, will give to me on that day, and not to me only but also to all who have loved His appearing."

He had demonstrated what those vows to each other meant and entailed
I also reflected on Bill and all that he had done in the last five years and especially those last few months.

He had demonstrated what those vows to each other meant and entailed. And the rest of us are better because of that example.

Join our conversation at www.hopeforlife.org.

"The Vows" by Bill Brant is licensed under a Creative Commons License. Heartlight encourages you to share this material with others in church bulletins, personal emails, and other non-commercial uses. Please see our Usage Guidelines for more information.