Falling at His Feet

What do all these events in Jesus' life have in common? 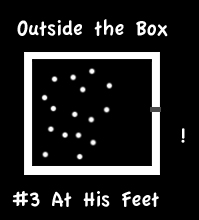 Any of those ever describe you? Most of us have been one or more of these at some point. Maybe that's where you are right now. Here's the reason for hope. Jesus came for folks in these situations. Jesus said it himself:

And a boat of confused friends, a father with a dying child, a woman with an incurable illness, and especially a guy named Battalion let us all know it's true (Luke 8:22-56)! 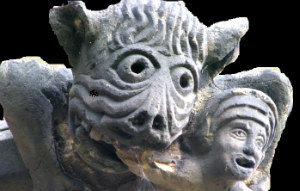 Battalion — you may know him as Legion (his story is told below). The truth is, the man's name is not given; we only know him by the incredible number of demons who inhabit him. He is lost in as many ways as a person can be lost. He is all of the things we listed above — desperate, hopeless, in bondage, self-destructive, out of control with incredible strength, living among the dead, and most of all, alone:

The man is full of demonic spirits. He's been running around for a long time stark naked, and he's homeless, sleeping among the dead in a cemetery. This man has on many occasions been tied up and chained and kept under guard, but each time he has broken free and the demonic power has driven him back into remote places away from human contact (Luke 8:27-29 The Voice).

Life for Battalion was subhuman! He was literally living hell on earth. And when we see what the power of the evil one and his minions have done to this man, we see what the evil one wants to do with all of us — make our lives desperate, out of control, barely existing in living death, and isolated from any people who could and would help us. Temptation comes in alluring packages, but the grip of Satan when he has us is awful and terrifying!

But here is the powerful truth of this story in two bite sized truths: 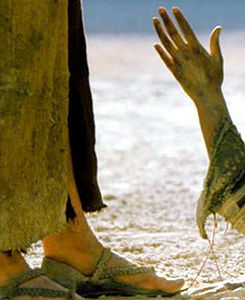 So the question is not what has us in its grips; the question is when are we going to fall at the feet of Jesus recognizing that we cannot solve our biggest problems without Jesus as Lord of our lives?

If Battalion's actions are not enough to convince us, Luke reminds us that what holds these four events together: in each event, those in need are on their knees at the feet of Jesus. Jesus can handle our "Big Four" primal fears, but that help begins with our surrender. It begins with us falling at the feet of Jesus as our Lord. When we do, Jesus begins to restore life in all its fullness, purpose, meaning, and vibrancy.

And restoring life, real life in all its fullness, is what Jesus came to give us (John 10:10).

26 When they get to the other side of the lake, in the Gerasene country opposite Galilee, 27 a man from the city is waiting for Jesus when He steps out of the boat. The man is full of demonic spirits. He's been running around for a long time stark naked, and he's homeless, sleeping among the dead in a cemetery. 28-29 This man has on many occasions been tied up and chained and kept under guard, but each time he has broken free and the demonic power has driven him back into remote places away from human contact. Jesus commands the demonic force to leave him. The man looks at Jesus and starts screaming. He falls down in front of Jesus.

Possessed Man (shouting):
Don't torment me, Jesus, Son of the Most High God! Why are You here?

He says this because an army of demons is inside of him. 31 The demons start begging Jesus not to send them into the bottomless pit. 32 They plead instead to enter into a herd of pigs feeding on a steep hillside near the shore. Jesus gives them permission to do so. 33 Suddenly the man is liberated from the demons, but the pigs — they stampede, squealing down the hill and into the lake where they drown themselves.

34 The pig owners see all this. They run back to their town and tell everyone in the region about it. 35 Soon a crowd rushes from the town to see what's going on out by the lake. There they find Jesus seated to teach with the newly liberated man sitting at His feet learning in the posture of a disciple. This former madman is now properly dressed and completely sane. This frightens the people. 36 The pig owners tell them the whole story — the healing, the pigs' mass suicide, everything.

37 The people are scared to death, and they don't want this scary abnormality happening in their territory. They ask Jesus to leave immediately. Jesus doesn't argue. He prepares to leave, 38 but before they embark, the newly liberated man begs to come along and join the band of disciples.

Jesus:
39 No. Go home. Tell your people this amazing story about how much God has done for you.

The man does so. In fact, he tells everyone in the whole city how much Jesus did for him that day on the shore.

See the other articles in this series:

"Falling at His Feet" by Phil Ware is licensed under a Creative Commons License. Heartlight encourages you to share this material with others in church bulletins, personal emails, and other non-commercial uses. Please see our Usage Guidelines for more information.