Do you have someone who needs you to believe in him? 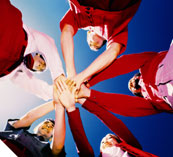 Timothy, my dear son, be strong with the special favor God gives you in Christ Jesus. You have heard me teach many things that have been confirmed by many reliable witnesses. Teach these great truths to trustworthy people who are able to pass them on to others. (2 Timothy 2:1-2)

How did an 18-year-old from Washington, D.C., wind up over a thousand miles from home in Fort Scott, Kansas? A city kid in the flat, open plains of a small town? A young man whose father is in jail and who has no idea where his mother is, get enrolled at a community college? It's an improbable, beautiful story.

Domonic Blackwell is the first person in his family to graduate from high school. Because his biological parents are non-factors in his life, his great- grandmother has reared him since he was only three days old. She is 70 years old, lives on a tight budget, and has taken responsibility not only for Domonic but for his four younger siblings as well. Ms. Willie Black must be a phenomenal lady.

Ms. Black has invested her life in giving Domonic a chance. She has taught him to be a responsible, respectful young man. A Washington Post reporter, whose story put me onto him, was impressed with his polite "Yes, sir" and "No, sir" responses. And he is determined to live up to the positive hopes his great- grandmother and siblings have for him. "I have a shot to make something out of myself; they're counting on me," Domonic says. "I need to make it."

Enter Avrie Parks, Craig Jeffries, Sheila Campbell, and a host of others. Domonic's shot at making it centers around football. At 6-foot-2 and 340 pounds, he was good enough at high school football to get noticed by several colleges; his SAT score of 700 wasn't good enough to let him play for the three schools willing to offer him a scholarship. So Sheila Campbell — who calls herself a Christian mentor to Domonic — turned up the option of a two-year community college in Kansas. Jeffries, his high school coach, convinced the college that Domonic could play on their offensive line. And Avrie Parks, president of a neighborhood association where Willie Black lives, decided to help the project along.

They're counting on me ... I need to make it.
Domonic got a scholarship from Fort Scott Community College that pays for tuition and books only. He would still need money for room and board that his great-grandmother doesn't have. So the neighborhood association started telling his story — and collecting $20 and $10 and $5 bills from neighbors who wanted Domonic to have a chance. Several people could only give $1. Go Domonic!

Everybody needs a "booster club" — athlete or flute player, bumbling new employee or fifth-grade math student. And you can organize it. No, you can be it!

Offering opportunity and hope to a struggler is holy partnership with God.

"Domonic's Fan Club" by Rubel Shelly is licensed under a Creative Commons License. Heartlight encourages you to share this material with others in church bulletins, personal emails, and other non-commercial uses. Please see our Usage Guidelines for more information.