Where can I get a good dose of boldness and power? 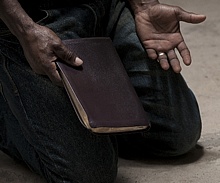 "We've been in the same church for years, but one Sunday when everyone was introducing themselves, the folks in the rows between us moved out of the way and there he was. We met that day and nothing was ever the same again!"

"Driving down North 1st in the afternoon was always something I hated — the sun blazing away right in my face, blinding me even with sun glasses on and making it hard to see. Then on this one afternoon, as I was running a little late and the sun was disappearing behind a few fleecy clouds, I saw the most spectacular sunset as the sky filled with a dazzling array of colors — you couldn't even begin to describe how beautiful it was!"

God has a way of surprising us in the middle of our routines if we let him. It was that way for a lame guy by the Beautiful Gate going into the Temple in Jerusalem one afternoon. He was carried there by the same friends, to the same place, at the same time, to beg from the same people when a couple of unfamiliar guys passed by him.

The two guys were Peter and John, passionate followers of Jesus. The lame man looked at them expectantly — new guys might mean a few more coins and maybe a little dinner. But as these two hesitated, then looked him in the eye, an amazing thing happened. The apostle Peter asked the man to look him in the eye and then said to him:

Silver or gold I do not have, but what I do have I give you. In the name of Jesus Christ of Nazareth, walk (Acts 3:6 NIV).

And the man walked!

The religious and political powers thought they had rid themselves of Jesus when they crucified him. They hoped to never hear the name of Jesus of Nazareth again. They wanted his influence to be as dead and gone as he was when he was taken down from the cross. They assumed his followers would cower back to Nazareth, never to be heard from again. But Jerusalem soon became filled with this name: Jesus, the servant of God, the Son of God, the Messiah, the Jesus from Nazareth. These once cowardly men are now turned bold. This once dead enemy of the state is resurrected in power and his followers are passionately sharing his story. This is the truly amazing thing. These unlearned and powerless men wouldn't shut up about the name of Jesus and changing the world by the power and authority of that name!

Jesus promised his followers that they would do greater things than he did once he returned to the Father!
So how did this timid, small, insignificant group of Jesus’ followers become so bold? Three things were crucial:

Jesus promised his followers that they would do greater things than he did once he returned to the Father (John 14:12-13). Now they were doing it. Simple folks from Galilee, once fearful and in hiding, were speaking boldly the name of Jesus and the number of disciples was growing exponentially in Jerusalem and beyond.

So what about us? Why do we seem so timid? Why do we feel so powerless against the tidal flood of culture’s skepticism and unbelief? Could it be that we need to go back to those vital three things that marked the early church? Of course we should! So I want to encourage you one more time to go read Acts chapters 3 through 5. Notice the emphasis on the name of Jesus. Watch as these fearful people become powerful witnesses. Take notice of the special prayer they prayed (Acts 4:23-31). And I invite you to join me, and many others, in praying this prayer each day this summer:

Now, Lord, consider their threats and enable your servants to speak your word with great boldness. Stretch out your hand to heal and perform signs and wonders through the name of your holy servant Jesus (Acts 4:29-30 NIV).

You can download a free copy of this prayer with a set of summer daily recommended spiritual practices here — http://hlt.me/LDnJ1P

"Greater Things: Boldness" by Phil Ware is licensed under a Creative Commons License. Heartlight encourages you to share this material with others in church bulletins, personal emails, and other non-commercial uses. Please see our Usage Guidelines for more information.