There are a lot of excuses, but they usually all boil down to fear! 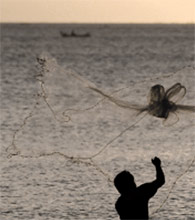 That's the best way to characterize the dire circumstances in which Peter and John found themselves. They had spent the night in jail to help them appreciate the problems they were causing by speaking about Jesus (Acts 4:1-22). The folks who were threatening them were the very same folks who petitioned Pilate to have Jesus crucified. The religious power brokers, led by the High Priest family of Annas and Caiaphas, wanted the Jesus-talk to stop. Their problem was that Peter and John refused:

Salvation is found in no one else, for there is no other name given under heaven by which we must be saved (Acts 4:12). ... We cannot help speaking about what we have seen and heard (Acts 4:20).

They were threatened again, and then released. So they returned to the other believers and reported this. However, rather than shrinking back in fear, these early followers of Jesus "raised their voices together in prayer to God" (Acts 4:24). Their prayer that follows is a powerful antidote to the fear we face when are trying to share Jesus in the face of hostility, cultural reluctance, religious opposition, and political threats. Notice with me three key elements of this prayer.

They begin their prayer with those words. Their following statements help us understand what they meant by them. They recognized that God had created everything in the universe and that the Holy One had spoken through David that the events they faced would happen. In other words, they were saying something like, "God, we believe that you are all powerful, that you can do whatever you chose, and that you spoke about this kind of problem centuries ago."

In the face of great opposition, they didn't begin with, "Help us! Fix it! Stop it! Remove the problems!" Instead, they centered themselves back in the greatness and will of God. I am convicted that I get so swamped by the consumerist culture in which I find myself that I often go to God with a focus on the problem and how I want it fixed rather than focusing upon the ultimate Problem Solver. I want to tell him what to do and how to do it and when to have it done. I can't imagine any redemptive role in my suffering, discipline, courage, or character development. This prayer of the early disciples is a great reminder for me: I need focus first on the will and greatness of God!

"Now, Lord, consider their threats and enable your servants to speak your word with great boldness" (Acts 4:29).

Tuning their hearts to God's will in prayer, they then could ask for something greater than their own protection or comfort. They wanted help to muster their courage and boldly speak the message of Jesus. They realized that the power to do this did not rest in their own strength. "Enable your servants ..." is such an honest recognition of their need for power from God ("enable") and their proper role before God ("your servants")! Later, when the persecution intensified, many believers were driven out of Jerusalem; but even then, their focus was on sharing the message of Jesus (Acts 8:1-4). They were ready to lose themselves, their homes, and even their lives to the greater cause of sharing the message of Jesus.

After they prayed, the place where they were meeting was shaken. And they were all filled with the Holy Spirit and spoke the word of God boldly (Acts 4:31).

God answered their prayer. All — not just apostles, but "all" — were filled with the Holy Spirit. As followers of Jesus, they already had the Holy Spirit indwelling them (Acts 2:38; Acts 5:32). They were asking for a special outpouring of the Holy Spirit to help them do what they had asked to be able to do and what God wanted to do through them (Luke 11:13). The result of this prayer and the movement of the Holy Spirit enabled them to boldly declare Jesus. The influence of the resurrected Lord was even more powerful than before the threats and opposition!

We can come up with many things that keep us from sharing Jesus today. Yet when we look under the surface of those "reasons," we nearly always find the core reason to be fear. We are afraid of being rejected. We are afraid of blowing it when we share Jesus. We fear the reprisals and ridicule that may result. We fear blowing the timing. We fear projecting the wrong image. We fear we aren't the best person to share. But bottom line, we allow ourselves to be ruled by fear.

So how about we make a commitment to do a couple of things to move past our fear and enable us, as God's servants, to share Jesus more effectively?

You notice the common ingredient?! Prayer! Let's spend more time talking with God, so when the time comes, we are ready to share with others the grace of God that is ours in Christ Jesus!

What keeps you from sharing Jesus?
For a humorous, yet convicting video about how we talk ourselves out of sharing Jesus with others, see CrossClix.

What keeps you from sharing Jesus with your circle of influence — with your FRAN's: Friends, Relatives, Acquaintances, and Neighbors?

What is different about the prayer of the early believers and your prayers? (Acts 4:23-31)

How can we balance the need to be bold in sharing Jesus (Acts 4:31) with the command to share Jesus with "gentleness and respect" (1 Peter 3:15)?

Who are four people that you are willing to put on your prayer watch list with whom you want to share Jesus?

"Catch & Release: Fear" by Phil Ware is licensed under a Creative Commons License. Heartlight encourages you to share this material with others in church bulletins, personal emails, and other non-commercial uses. Please see our Usage Guidelines for more information.