Be a Neighbor this Week!

Who will you show God's love today? 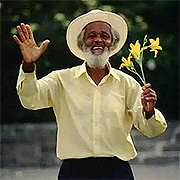 by Rick Brown (04/17/2012) | Special Features
"That's what's wrong with the world today. If we'd learn to love each other there'd be no war ... no killing ... no raping ... no fighting. People would be loving one another and that's what we human beings got to learn: how to love one another."

So says Johnny Barnes. Johnny rises at 2:00 a.m. every morning, eats his breakfast, and takes his place from 4:00 a.m. until 10:00 a.m. at the Crow Lane roundabout in Hamilton, Bermuda. One day in 1984, he stopped at the roundabout and started waving at the passing commuters. Due to the unique layout of the island and its roads, nearly all drivers at rush hour coming from the western and southern areas of the island pass Barnes at the roundabout.

He doesn't merely wave, though. As people drive and walk by he keeps up a constant chatter:

He's talked to people who have told him no one had ever told them they were loved. He tries to make sure they at least hear it from him. "People need to know that love is important," he says.

What would move an 88 year-old man to get up before dawn every day and stand for six hours with his message for the crowds? Perhaps the same thing that caused Jesus to mount a colt and ride into Jerusalem. The multitude of his disciples would rejoice, praise God, and say:

He did not do it, however, for the acclaim. Jesus knew that in a short time he would be delivered over to the chief priests and scribes, be condemned to death and hung on a cross. He had predicted it explicitly three times to his disciples. He knew where he was headed.

What would cause him to endure this extreme punishment voluntarily?

When asked what the greatest commandment was Jesus summed it up in one word. "Love!" Love God with all that you are and love your neighbor as yourself (Mark 12:29-31).

"Neighbor" means "one who is near." However, when Jesus tells us to "love our neighbor as ourselves," he redefines neighbor for us. Your neighbor can be near:

So love your neighbor this week. Johnny Barnes will. He will sacrifice some sleep, journey to his roundabout post, and stand on his 88-year old legs for six hours. He does not have a degree in philosophy or physics, but he is convinced that he knows the secret of life. "The world is made for love," he tells Bermuda visitors curious or brave enough to stop in traffic and shake his hand.

Love your neighbor this week. Jesus did. He rode into Jerusalem and sacrificed his life by hanging on a cross for six hours. And because he loved his neighbors, multitudes still follow him 2,000 years later.

Love your neighbor as yourself. It can change someone else's life. And it will definitely change yours.

"Be a Neighbor this Week!" by Rick Brown is licensed under a Creative Commons License. Heartlight encourages you to share this material with others in church bulletins, personal emails, and other non-commercial uses. Please see our Usage Guidelines for more information.