What do you see around Jesus? 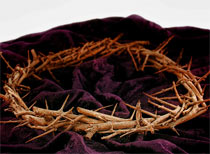 Does friendship have more value than money?

How about the so-called, "religious" leaders? They were ... abusers, liars, and haters. Spitting and punching Jesus in the face were acts of disrespect. Their hatred toward Jesus was a driving force persuading Governor Pilate to trade a prisoner in exchange for Jesus. The trade was the guilty for innocent.

Jesus' death sentence was a crushing blow to his mother and all those who loved him. The death penalty Jesus faced was cruel and unusual punishment by our standards today. The entire death scene was a circus show. Hate filled the air. Anger overshadowed sanity. People swarming to the scene to get a good look at the one they called "The King of the Jews"! Followers in shock to see the man called Jesus being nailed to planks of wood while the mob shouts insults and soldiers gamble for his clothes.

Finally, it happened. The crowd silenced. The insults stopped.

The mood is somber around the death scene. Shame and regret filled the emotions of those who were his friends. Disappointment. Sadness. Loss.

On crucifixion day, the body was laid to rest and the entrance to Jesus' gravesite was securely wedged into place. The family and friends left the gravesite in tremendous sorrow.

I imagine the weekend conversations went something like this:

Most are still in a state of shock.

"Hey, remember when Jesus walked on the water?"
"Yeah, I remember, I tried to walk on water, too."

"How about the time Jesus fed thousands with a little bit of fish and bread."

"Anyone remember the time Jesus washed our feet?"
"Oh, yes! He was a great teacher, friend, and servant."

"I got one, remember our last meal together?"
"He tried to tell us about his imminent death, but we were too busy denying everything he was telling us. If only we could go back in time."

"Then there was prayer time in Gethsemane. All he wanted was for us to stay awake and keep watch for him."
"Why didn't we listen?"
"If only we had a little more time with him!"

It's Sunday and most are still in a state of shock. A couple of ladies decided that they were going to visit Jesus' gravesite. As they arrived, nothing prepared them for what they were about to encounter. Fear ran up and down their spine. They were almost speechless.

And what comes next will blow your mind!

"Bribery, Cursing, and Lying" by Brian McCutchen is licensed under a Creative Commons License. Heartlight encourages you to share this material with others in church bulletins, personal emails, and other non-commercial uses. Please see our Usage Guidelines for more information.