The Head of the Snake is Crushed!

How do we deal with our fear of evil, the devil, and temptation.

So the LORD God said to the serpent,
"Because you have done this... I will put enmity between you and the woman, and between your offspring and hers; he will crush your head, and you will strike his heel" (Genesis 3:14-15).

But when the set time had fully come, God sent his Son, born of a woman, born under the law, to redeem those under the law, that we might receive adoption to sonship (Galatians 4:4-5).

Satan can disturb us, but he cannot defeat us. The head of the snake is crushed!

I saw a literal picture of this in a prairie ditch. A petroleum company was hiring strong backs and weak minds to lay a pipeline. Since I qualified, much of a high-school summer was spent shoveling in a shoulder-high West Texas trough.

One afternoon, the digging machine dislodged more than dirt!

We popped out of that hole faster than a jack-in-the-box. One worker launched his shovel and beheaded the rattler.

That scene is a parable of where we are in life. The old apostle John called Satan:

"He is that old snake called the devil... who tricks the whole world" (Revelation 12:9).

Has he not been decapitated?

Yes, but not with a shovel, but with a cross.

Decapitated? Yes! Not with a shovel, but with a cross.

When you were dead in your sins... God made you alive with Christ. He forgave us all our sins... And having disarmed the powers and authorities [of their demonic power], he made a public spectacle of them, triumphing over them by the cross (Colossians 2:13-15).

So how does that leave us?

Confident — in Jesus’ power over Satan!

Trust the work of your Savior! 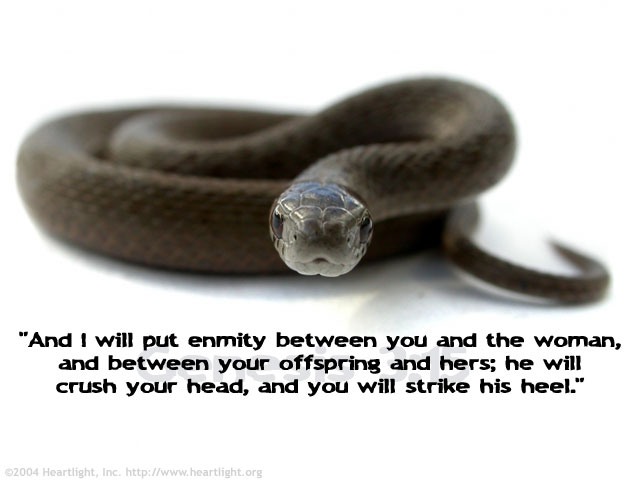 "The Head of the Snake is Crushed!" by Max Lucado is licensed under a Creative Commons License. Heartlight encourages you to share this material with others in church bulletins, personal emails, and other non-commercial uses. Please see our Usage Guidelines for more information.