How important are our differences? 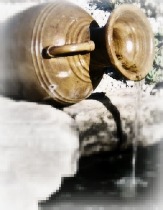 by Phil Ware (02/19/2012) | Two Minute Meditations
They were legends in the marriage and family field. One of them, my dad's first cousin, looked at our pre-marital inventory results shaking his head. "I'm not sure about this. I'm not sure you guys can make. You are as different as night and day."

I knew where he had picked up the phrase. His mother and her sisters — one of whom was my grandmother — used the phrase often. I had been dating this young lady for three years and now this legend, and my cousin, was calling it all into question. Was it all for nothing? Had I wasted my time? Were we incompatible? Were we really, "As different as..."

When we read John's story of Jesus, we bump into two very important people in the story who are "as different as night and day." They are Nicodemus (John 3:1-21) and the woman at the well (John 4:1-43). A simple reading of each of their stories shows their easily recognizable differences:

Now back to my engaged couple's story. As I was scrambling in my heart and my head about what to do with the premarital inventory results, the other legend of marriage and family therapy sat down and said, "Now, now. I think you're being too hard on them. You know how my wife and I are opposites of each other and we help strengthen each other. There's been a rough patch or two, but we have found opposites attract! Now Phil, if you will learn to do this... and Donna, if you will learn to do this... then I think you guys can do great!"

Whew! My palms were still sweaty, but the greasy feeling in the pit of my stomach went away almost instantly. Looking back, I'm sure they were playing good cop and bad cop with us. And yes, we have had some rough patches because in many ways we are different. Yet over the years, we've also learned that we have a whole lot more in common than we have that is different.

They are actually more like us than they are different!
That's also the point John wants us to see in his stories of Nicodemus and the woman at the well. If we tune our hearts to Jesus, we realize that these two were much more alike than they were different! Notice these similarities:

Now as significant as these six parallels may be, I believe four more similarities are absolutely vital.

Jesus stepped into the different worlds of these special people to bring them truth, life, and love. As he does, he also calls us to do the same because even people "as different as night and day" from us, are actually more like us than they are different — they need Jesus: his truth, his life, and his love. Jesus still calls us to open our eyes and reach out and bring those outside our comfort zones — outside the walls of our religious buildings and lifestyles — home to him (John 4:34-38).

"As Different as..." by Phil Ware is licensed under a Creative Commons License. Heartlight encourages you to share this material with others in church bulletins, personal emails, and other non-commercial uses. Please see our Usage Guidelines for more information.