More than just a Bag of Bones

What's left when it's all over? 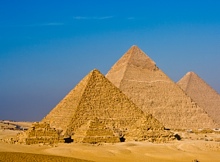 Got a bunch of hanging and uncompleted projects?

Get a bunch of things started and then forget them or go on to other more interesting things?

What about that bucket list or set of life goals you had for yourself — how you doing on them, or have you just abandoned them?

As the years go by, do you resent the opportunities of those who are younger and grown sullen with the apparent lack of opportunities you find for yourself?

Or, are you a finisher?

Do you want to see things through to the finish, even though the payoff doesn't appear to be that great?

Do you believe that the real character of a person is shown in how they finish their tasks, complete their projects, and leave a clearer path for those who follow?

More than finishing strong, do you want to finish well and bless those who come after you?

I love this little note in God's faith hall of fame found in Hebrews chapter 11:

It was by faith that Joseph, when he was about to die, said confidently that the people of Israel would leave Egypt. He even commanded them to take his bones with them when they left (Hebrews 11:22).

Think of all the phrases that could be used to describe Joseph's journey of life.

The Joseph saga* is as gripping a story as you will find anywhere. God filled Joseph's life with intrigue and rivalry, hardship and good fortune, hard work and incredible opportunities, unfairness and incredible blessing. And unlike so many heroes in the Bible, Joseph didn't turn bitter as he got older — he didn't abandon God as he got older and he didn't extract revenge on his rivals when he got older. Clearly, Joseph could have become bitter, he could have abandoned God, and he could have extracted revenge. He had the power and the apparent justification to do all of these, yet he did none of them.

The reality of God's presence sustained Joseph, even in the times when God's blessing appeared distant or nonexistent.** So as Joseph grew older, saved his family from famine, forgave his brothers for doing evil to him, provided a place for the whole family clan to live, and enjoyed rich and wonderful years with his sons and their families (Genesis 50:22-26). Rather than extracting revenge, Joseph injected grace. Rather than becoming bitter, Joseph blessed his family with a better future.

And in Joseph's dying moments, he did something even more remarkable: rather than wanting an elaborate tomb and a hero's burial, Joseph wanted his bones to be a reminder of God's promise of a better future:

"Soon I will die," Joseph told his brothers, "but God will surely come to help you and lead you out of this land of Egypt. He will bring you back to the land he solemnly promised to give to Abraham, to Isaac, and to Jacob."Then Joseph made the sons of Israel swear an oath, and he said, "When God comes to help you and lead you back, you must take my bones with you" (Genesis 50:24-25).

Just as hope in God's future sustained Joseph through his slavery and imprisonment, he wanted his bones to be a "living" and moving witness to his descendants. Those bones were the constant reminder that...

Joseph reminds us to bless forward rather than bemoan what could have been.
Hundreds of years later, Joseph's bones were buried in the Promised Land just as Joseph had asked — God was faithful to his promise to bring his people into the Promised Land and the people were faithful to Joseph in his request to be buried there (Joshua 24:32).

Joseph's descendants were not slaves or wanderers or prisoners, but conquerors. Their home wasn't Egypt or a tent that moved from place to place in the desert, but in their own country, the Promised Land. And for all of those years, the bones of Joseph gave his people hope and spoke of God's promised future. The one who wandered across that same desert, found himself imprisoned and enslaved in the same foreign land, and who had risen to a new life because of the blessing of God, was a witness in death and bones to God's promises of new life and new future.

None of us, old or young, knows how much time we have or when exactly we will finish this earthly part of our journey. But Joseph reminds us to finish with faith, to end with encouragement, and bless forward rather than bemoan what could have been. Joseph reminds us to be a good finisher.

I don't know about you, but I want to finish like Joseph!

** Notice the repeated emphasis on God being with Joseph and blessing him even though he is a slave or a prisoner in a foreign land (Genesis 39:2-5; Genesis 39:20-23).

For more on the life of Joseph, check out Phil's MP3 audio messages from a three part series entitled "The Peculiar Path of Joe Jacobson":

"More than just a Bag of Bones" by Phil Ware is licensed under a Creative Commons License. Heartlight encourages you to share this material with others in church bulletins, personal emails, and other non-commercial uses. Please see our Usage Guidelines for more information.