How can you tame a raging child volcano? 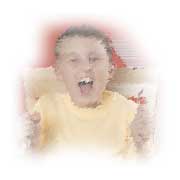 by Jenny Runkel (08/30/2006) | Together in His Grace
Complete and total meltdown. Tears streaming, body thrashing, words spewing. It wasn't pretty, but at least it wasn't me. My almost seven-year-old son was throwing a tantrum that would give a two-year- old a run for his money. As much as I wanted to join Brandon in his tantrum, I am proud to say that I didn't ... but I was close.

Looking back on it, the scene had been building for days. Like a volcano emitting small warning blasts, my son had been bubbling for a week, seemingly just looking for a chance to erupt. I attributed it to exhaustion at first — and part of that was true. Whose bright idea was it to drag us all to three baseball games, a tennis match, and a birthday party all in one week? Oh yeah, that would be me. Unfortunately, I can't blame Hal for this lack of judgment. He wasn't even here. Now that I think about it, maybe that was at the heart of the whole issue. Let me set the scene for you.

It was Friday evening, the end of a seemingly endless week. Hal was doing the book thing in Washington, D.C., and both of the kids had a friend over from school to spend the night. I had the evening all planned out. The children would play outside together, exploring the natural world and learning about cooperation. They would then willingly skip inside for a well-balanced meal, trot upstairs for a hot bath, and fall asleep from exhaustion.

It all began exactly according to plan. The girls were in a rousing game of kickball with several neighborhood children. The boys and I were playing catch and, for a time, all was well with the world. But then it was time to come inside. Three out of the four kids grumbled as they put up the balls and traipsed into the house. The fourth blatantly refused. He wasn't ready to put the glove away and begged for "just three more catches." At first I said no, but he was persistent and with each plea, he got louder and louder.

Now, I have a degree in history. I teach British Literature. I, of all people, should know that appeasement doesn't work. But admittedly, my fear of a child's meltdown clouded my judgment. Churchill turned over in his grave as I uttered the words, "OK, buddy, just three more catches, and then you have to go inside." I knew as they escaped my lips that those words were a mistake and were inspired more by laziness than conviction. I could feel the lava boiling and didn't want to deal with an eruption, so I threw the ball. Catch one. He fired it back into my glove. Maybe this wasn't such a bad choice. He was smiling, having fun, enjoying the outdoors. I threw the ball. Catch two. A real stinger came back at me as I was congratulating myself on a perfect evening. Soon, we'd be inside starting the rest of my well planned night. I tossed the third ball to Brandon.

This time he missed.

"You can't end on a bad one, Mom! Just one more!" Now, I am as big a sports nut as they come, and I loved his competitive spirit, but my integrity was on the line. I had already capitulated once and I knew that to do it again would only prolong the inevitable and make it that much worse. I knew I had to follow through this time and I knew it wouldn't be pretty.

"Sorry, Bud. We can throw more tomorrow; now it's time to go in." And then it began. The mother of all tantrums. As Brandon's poor unsuspecting friend watched wide-eyed, my son erupted. He screamed, he yelled, he tried to block me from entering the back door. I could feel the blood rushing to my face. How embarrassing!

Once inside, it only escalated. He became hysterical and couldn't stop crying. I really wanted to yell, "tag!" and have Hal swoop in from the living room to take over ... but I couldn't. I was the lone grown up amidst three confused kids and one inconsolable one. Maybe they wouldn't tell anyone if I just screamed like a banshee and ran away — it was certainly more appealing than dealing with this embarrassing stunt. For a moment, I felt paralyzed by the scene. What was the "right thing" to do?

Then, for some odd reason, one of my favorite movies popped into my head: "The Matrix." I have the power, if I recognize that I do, to slow things down. I started to think of myself as Neo, the main character, and Brandon's ranting and raving as the deadly bullets. I did not have to let them get to me. That was a conscious choice. As I allowed that image to linger in my mind, something amazing happened. I was able to stop and really think about what was going on. It wasn't that my son was intentionally being disobedient just to make me angry. True, that was happening, but there was much more to it than that. He was missing his Daddy and was testing me to see if I was strong enough in his absence to make everything seem alright. Once I was able to take this into account, it was easier to handle the immediate situation with peace rather than pride.

Now was not the time for lectures; Brandon was incapable of hearing me at this point. He needed me to help him calm down—and seeing things in this new light helped me stay calm myself. With my newly-fashioned bullet-proof vest, I turned my attention to the whirling dervish that was currently throwing his toys all around his room. I calmly sent the other three kids into the game room to play, took a deep breath, and headed into the volcano.

I had never seen Brandon like this before. He literally could not control his temper and to be honest, it scared me a bit. I knew he needed something to snap him out of his state of mind, so I led him into the bathroom ("herded" would be more accurate) and proceeded to run a bath. He, of course, resisted --he was resisting anything I did at this point. I simply filled the bath and placed him in it — clothes and all. He was so shocked that he sputtered and stammered for a moment and then, for the first time in about twenty minutes, the flailing stopped. He just sat there quietly. I helped him undress and bathe and neither of us spoke a word. After he was dressed, we walked back into his room, which looked like a bomb had exploded. He sat on his bed and looked around at the mess that he had created. He wanted to join the other kids, but before he was allowed to do so, he had to apologize to them for being so rude. I was quietly contemplating my lecture about taking "no" for an answer as I tucked the kids into bed that night. But then something miraculous happened.

As we got ready to say our prayers that night, we talked about the things that we were concerned about. Aging pets and minor scrapes started the conversation, but just as we were about to start praying, Brandon spoke. "I think I need to pray for me. I need to learn to take 'no' for an answer and not get so mad when I lose." Huh? The kid stole my thunder! I had my carefully-laid speech fully rehearsed. I sat back in amazement as the other three children then talked about how they struggle with the same thing and told of times that they got out of control. Suddenly, they were laughing about their own stubbornness and coming up with ideas about what might work instead. I couldn't help but smile at their candor and honesty.

I strapped on my bulletproof vest.
We often joke that there's no such thing as "ScreamFree" kids. This is because kids are just going to be kids and it's our job, not theirs, to focus on ourselves, calm ourselves down, and grow ourselves up. But on this night, I was directly observing some "ScreamFree" kids.

The next morning was a flurry of cornflakes and cartoons, with little fanfare. After a while, I told the kids it was time to turn off the tv and get dressed. Brandon's familiar whine penetrated the air, "Mom, can we pleeeeeeease watch just one more show."

He drew in a long breath and started to furrow his brow. I strapped on my bulletproof vest, ready this time for any blows that may come my way.

"Remember last night, Brandon? Did throwing a fit get you what you wanted?" His face relaxed. He begrudgingly said, "No" and trod heavily upstairs with the others. Minutes later, the sounds of hide and seek were echoing down the halls.

As I sit here and reflect on that incident, I still question my decisions. I know that going back on my first "no" only made things worse in the end. And maybe the bathtub was a bit over the top. But I felt pretty good about it overall. I made it through without freaking out. My son learned that he can push my buttons all he wants and I'll still be there standing strong, even if Daddy isn't home — in fact, especially when he isn't home. And I learned that there is nothing that my kids can throw at me that can make me crumple. That is always my choice.

"Mt. St. Kid" by Jenny Runkel is licensed under a Creative Commons License. Heartlight encourages you to share this material with others in church bulletins, personal emails, and other non-commercial uses. Please see our Usage Guidelines for more information.

Jenny Runkel is a writer with ScreamFree Living, Inc., a company she co-created with her husband, Hal. Through publishing, speaking, training, and their website, www.screamfree.com, Jenny, Hal and their team are committed to calming the world, one relationship at a time. Jenny has also been directly influencing and forming children and families for over ten years, having taught preschool, ministered to teenagers in church settings, and taught professionally in several high schools. Jenny currently teaches high school at Greater Atlanta Christian School. She and Hal have been married for 13 years and try to remain calm while parenting their two wonderful children: Hannah, 9, and Brandon, 7. (Visit the Author's Website)