What's a young guy got to do? 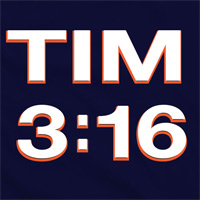 I'm not talking about football games, mind you. Tebow had a great winning career at the University of Florida. Against the cynics who said he couldn't make the grade as a pro, he led the Denver Broncos to some highly improbable wins this year — including that remarkable game-winning pass that beat the Steelers in overtime in a playoff game. Quickest OT win in NFL history. Only 11 seconds.

It's in his polarizing public image that Tebow can't seem to get a break. On the one hand, does anybody really think God cares who wins a football game? On the other, would there be protests against a person of a faith group other than conservative Christians showing a public sign of his religious faith?

From within Christian ranks, some point to Jesus' words about letting people "see your good works and give glory to your Father in heaven" (Matthew 5:16); again, though, who thinks he was talking about a touchdown pass? Others point to Jesus' words later in the same sermon that his followers should "beware of practicing your piety before others to be seen by them" (Matthew 6:1); there, in fact, he was specifically talking about making donations and saying public prayers.

Then there's Bill Maher's now-notorious crudity about Jesus and Tebow in celebration of the Broncos being beaten. Others make fun of his virginity. Maybe the story will be told in a "Chariots of Fire" type movie a quarter century from now and Tebow will be as heroic as Harold Abrahams (Jew) and Eric Liddell (Christian) are in their cinematic personas. Or, perhaps they were as vilified in their own time for their Jewishness and Christianity as Tebow is being scoffed at now.

So what's a religious athlete to do? Why can't Tim Tebow seem to win here? Will he eventually get the same respect Sandy Koufax did for not pitching on the Sabbath or Reggie White for intimidating other teams' offensive lines on Sunday? Koufax was an observant Jew, and White was an ordained Christian minister.

Let Tim Tebow play football. While some athletes play the strutting-peacock role, notch their beds with willing partners whose names they won't remember in 30 days (or minutes), and make headlines for violating league policies on banned substances, let him live the conservative values his missionary parents taught him as a home-schooled Baptist child.

Please don't encourage Tebow to prove he is a peer to his pro colleagues by taunting him to violate his convictions or act more like a thug. If his religiosity seems a bit over the top and immature at times, make the same excuse for him as for the defensive back lined up against him who has fathered three children by three different women. He's trying to find his way in a confusing environment — although doesn't his goal seem a lot more wholesome and uplifting?

This season is over for Tebow after being dominated by Tom Brady and the Patriots. Did God decide the outcome of that game? I suspect a seasoned pro quarterback with a superior supporting cast dictated the score. Not divine whim.

Time will tell if Tebow is a franchise player and a godly man. I don't have a clue about the former, but I am optimistic about (and praying for) the latter.

It sure seems that Paul's words to Timothy, his son in the faith, are just as appropriate for all of us today as they were when he first wrote them:

You've been a good apprentice to me, a part of my teaching, my manner of life, direction, faith, steadiness, love, patience, troubles, sufferings—suffering along with me in all the grief I had to put up with in Antioch, Iconium, and Lystra. And you also well know that God rescued me! Anyone who wants to live all out for Christ is in for a lot of trouble; there's no getting around it. Unscrupulous con men will continue to exploit the faith. They're as deceived as the people they lead astray. As long as they are out there, things can only get worse.But don't let it faze you. Stick with what you learned and believed, sure of the integrity of your teachers — why, you took in the sacred Scriptures with your mother's milk! There's nothing like the written Word of God for showing you the way to salvation through faith in Christ Jesus. Every part of Scripture is God-breathed and useful one way or another — showing us truth, exposing our rebellion, correcting our mistakes, training us to live God's way. Through the Word we are put together and shaped up for the tasks God has for us (2 Timothy 3:10-17 NLT).

"Tim Tebow Can't Win!?" by Rubel Shelly is licensed under a Creative Commons License. Heartlight encourages you to share this material with others in church bulletins, personal emails, and other non-commercial uses. Please see our Usage Guidelines for more information.