What was God's plan to help Jesus' broken and flawed followers accomplish his mission?

That had to be the comment made by angels when Jesus returned to heaven. He was leaving the start of his church, the expansion of the reign of God on earth, and the spread of the good news of Jesus to the whole world to them — to that group of men and women he left behind staring into the sky (Acts 1:1-11).

Sure, he had left them with a PURPOSE for their future ministry:

But, let's be realistic. Do you see any world-changers in this little group? Peter denied the Lord three times and the other apostles ran off and abandoned their Lord in his worst moment — and all of this after having been warned repeatedly about what was going to happen. In addition to everything else, this group of misfits is missing one of their own — Judas, who betrayed Jesus. To top it all off, they weren't much to begin with — a bunch of powerless and disrespected folks from despised Galilee!

Yes, they had a PURPOSE: to be Jesus' "witnesses." And if that PURPOSE wasn't a difficult enough challenge, notice the scope of where that purpose was to be accomplished: "in Jerusalem, and in all Judea and Samaria, and to the ends of the earth."

This group of broken failures was going to take Jesus' message to the whole world?

If Jesus hadn't been Lord, already conquered death, and been given all authority in heaven and on earth, his statement about their mission would have been laughable ... more than improbable, these words would have felt like they were impossible!

So Jesus' answer to us about this would probably go something like this:

"Humanly speaking, it is impossible. But with God everything is possible" (Matthew 19:26).

We do believe the Lord's words. Yet over time, we've been exhausted and a bit jaded by all the church bumper stickers and slogans and hype. We believe it was possible for them, but not really possible for us, today. Let's be honest, in most of our churches, Bible studies, and homes, we've become like the people of Jesus' hometown. Mark describes it this way:

And because of their unbelief, he couldn't do any miracles among them except to place his hands on a few sick people and heal them. And he was amazed at their unbelief (Mark 6:5-6).

Yet the real issue isn't that we live so far in time from Jesus' words and true access to God's power. Our PURPOSE, to be witnesses for Jesus, hasn't changed. The issue IS that we haven't committed ourselves — our hearts, our families, our Bible studies, our churches — to the PLAN, PEOPLE, and POWER that enabled them to live out Jesus' mission — the same mission Jesus has for us.

So let's ask a simple question and let Luke answer the question. What was Jesus' plan to help them live out their PURPOSE of being witnesses "to the ends of the earth"?

They all joined together constantly in prayer, along with the women and Mary the mother of Jesus, and with his brothers (Acts 1:14).

Luke tells us in his gospel that prayer was the powerful framework of Jesus' ministry, as he often got off alone to pray and be alone with the Father (Luke 5:16). And if we read the book of Acts attentively, we see that prayer was the framework, or the PLAN, that Jesus had for his followers to accomplish their mission — * see the Scriptures related to prayer in the first 16 chapters of Acts at the end of this message.

While prayer does not change things or empower us, prayer does remind us of the One who can change any circumstance and empower His people past any obstacle. So when you join together with other believers and pray, sing, read Scripture, confess that Christ Jesus is Lord, and take communion with those who anticipate the Lord's return, remember that you are participating in the miracle of God doing the impossible through broken, flawed, and everyday people ... just like you and me! Your faith, my faith, is testimony to these flawed and broken people being used by God to accomplish their mission!

So how about joining me as we each ... 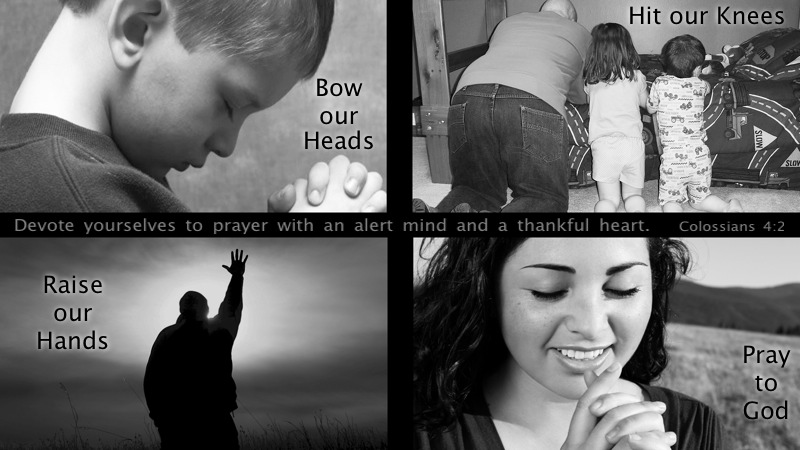 If you are looking for a daily prayer plan, you are encouraged to download the following pdf — http://hlt.me/yTsLLr — to use as a guide and also to subscribe to Passion for Praise — http://hlt.me/zZAPeY — to help you grow in your language of adoration and praise to God.

Here are the passages on prayer in the first half of the book of Acts:

Your faith, my faith, is testimony to these flawed and broken people being used by God!

"Better Broken: The Plan" by Phil Ware is licensed under a Creative Commons License. Heartlight encourages you to share this material with others in church bulletins, personal emails, and other non-commercial uses. Please see our Usage Guidelines for more information.