Looking back, what is there that is unshakeable? 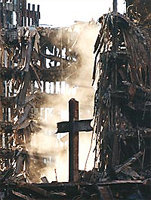 by Phil Ware (09/09/2011) | Two Minute Meditations
That Tuesday morning was supposed to be special. I got up a little early and headed to the HEB parking lot in northern Pflugerville. I was waiting for some friends to pick me up to head to Houston and visit with folks at Eastern European Mission about providing some Heartlight resources in Russian.*

As I waited, I switched on ESPN radio to get caught up on the world of sports. When I did, I was in for a shock. Instead of one of the ESPN morning personalities, I heard Diane Sawyer. Even before I knew what was going on, I knew it had to be REALLY bad to preempt ESPN during drive time.

Diane and Charlie Gibson were describing the damage done to the first tower on "Good Morning America" for their TV audience. ESPN radio shared the audio feed from the TV show. As I listened trying to make sense of what had happened, out spilled the following, horrifying, dialogue between them and another man, Don Dahler, who was on the ground:

GIBSON: That looks like a second plane has just hit ...

GIBSON: ... concerted effort to attack the World Trade Center that is under way in downtown New York.

SAWYER: We will see that scene again just to make sure we saw what we thought we saw.

SAWYER: We had seen a plane coming in from the other direction earlier. I had noticed it. Had you, Charlie? I didn't know if that plane had been circled wide and came back from another direction, but we all watched it, and I just assumed ...

GIBSON: Ah, this is terrifying--awful.

SAWYER: We watch powerless. It's a horror.

I sat there stunned. I didn't need a news anchor, political expert, or social historian to tell me the world had changed. I remembered President Kennedy's assassination. I had witnessed Lee Harvey Oswald being shot on live black and white TV. I had seen Challenger explode on that bright blue morning. These were culture altering moments that deeply imbedded themselves into our personal and national psyche. But this was bigger, more awful and history-changing. I sat there stunned.

When my ride arrived to take me to Houston, the three of us visited and decided to go on with our trip. Somewhere in our hearts we knew that our mission to share the good news of Jesus in the Russian language was somehow connected with the healing of this event and that we needed to go on with our plans. We called ahead and the people would be waiting — they too wanted to keep our scheduled meeting.

Just after we had left, one of our Heartlight team called with the sound of fear in his voice and said, "Phil, I just got a call from a good friend in the Pentagon. They've been hit, too. It won't be released to the press for a few more minutes, but they don't know what is happening or where it is coming from and they are asking us to pray for guidance and help." Sure enough, in about ten minutes, the radio reported that there were unconfirmed reports that the Pentagon had been hit.

A few minutes later, another of our Heartlight team called and had purchased the web domain, prayerforthenation.com (we no longer run that website). We began to post information, videos, articles of consolation almost immediately. On the way to Houston, I wrote a piece for Heartlight that we would release as soon as I could go online in Houston. I decided not to answer my phone until my wife called for the third time. "Please tell me you are not going to Houston. They have scrambled jets because they think Houston and the oil refineries may be a target, too."

We talked a minute and I convinced her that there was no safe place, but with all air flights grounded, a place where jets were scrambled was probably the safest place I could be.

As soon as we arrived in Houston, they took me to a room with internet access and a TV feed. I finished the article and talked to our Heartlight team. The website was up and running and having traffic by that evening. Beginning the next day, we averaged 4 1/2 downloads per second for four days as people shared the videos and the words of comfort and as churches, individuals, and communities prayed for the world, the nation, the families who lost loved ones, and the city of New York as we grappled with the tragedy. 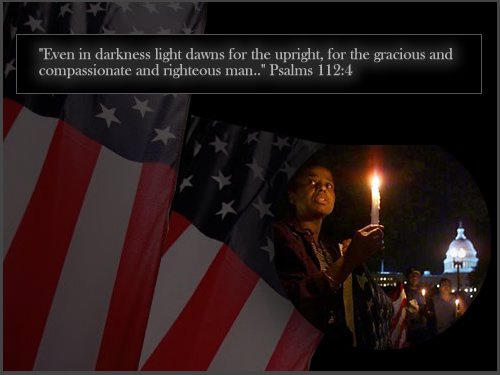 Yet in the middle of this awful mess one thing became very clear to us: we lived in a vulnerable, inter-connected world where the web would play a crucial part. If we were not there to be a presence for Christ, then others would use it for evil without any dissenting voice. While we grappled with how to pay for the enormous bandwidth costs for providing all those resources those first few weeks, we also realized that people were hungry for bigger solutions than money, power, and what national security could or could not provide.

As people's worlds were shaken, as faith in anyone's ability to protect those they love was shattered, and as human mortality was graphically exposed, our little Heartlight team realized that God's people needed to be present to hold the hurting, to bandage the wounds of the injured, to weep with the grieving. Our job was to hold one hand out to help and with the other hand connect people to something unshakable — something more helpful than revenge, something more redemptive than retribution, and something more lasting than hate.

Our world, our fragile world that is groaning in the pains of its brokenness (Romans 8:18-25), needed hope in something more ... more secure, more benevolent, and unshakable.

Ten years have passed. For most of us, it's hard to believe 9-11 was ten years ago. Much has changed about our world. Much more has not changed. If anything, we know more about our world's fragility, our vulnerability, and evil's malevolent grip on the hearts of desperately angry men and women. And now, just as much as then, we must remember that we must help our fellow travelers down life's uncertain road. We all need something more helpful than revenge, something more redemptive than retribution, and something more lasting than hate.

We were taught by Jesus in the Lord's prayer to pray for this grander reality — "Your kingdom come, your will be done, on earth as it is in heaven" (Matthew 6:9-15). Jesus challenges us to seek this kingdom, this special place of grace held together by love and empowered by the Holy Spirit (Matthew 6:33). 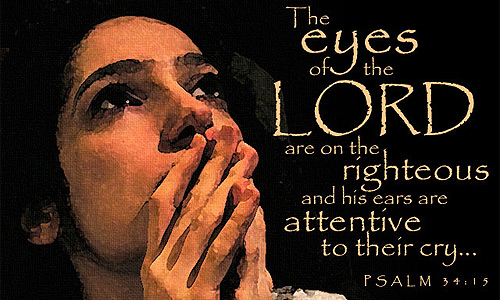 Jesus is not saying we should be focused on something to rescue us at the end of time, but the Lord is challenging us to pursue bringing the realities of the kingdom to life into our time, now. Rather than hoping for a kingdom to come that will take us away from all the earthly mess, Jesus is calling us to be conduits of the Father's grace so the kingdom can come into our lives and the lives of people we touch.

This kingdom — this reign of God in the hearts of men and women and displayed in the difference with which they live their lives — is an unshakeable kingdom. It can't be destroyed by the murderous attacks on a church in Nigeria, limited by the changing views of the place of church and state, rattled by natural disasters, or shaken by the crash of twin towers seen live on TV around the world. And so these moments of terror, destruction, murder, fear, and deep sorrow must not deter us from the tasks of sharing God's comfort, bringing God's grace, living out God's forgiveness, and proclaiming God's unshakeable kingdom.

The Holy Spirit in the book of Hebrews reminds us of this truth:

Therefore, since we are receiving a kingdom that cannot be shaken, let us be thankful, and so worship God acceptably with reverence and awe for our "God is a consuming fire" (Hebrews 12:28 NIV).

But this is not a call for believers to hole up in some elegant church building, fortressed against the world, and sing praises and pray prayers in comfortable isolation. No, this unshakeable kingdom involves the real world worship of ... (Hebrews 13:1-16):

No wonder this is an unshakeable kingdom!

No wonder this is an unshakeable kingdom: it is built on the character of an unshakeable God and reflected in the counter-cultural way his people respond to crisis, disaster, and hatred!

Send an e-card related to this post for free. You can find several cards here — http://hlt.me/ocQpcG

"Unshakeable: 10 Years Revisited" by Phil Ware is licensed under a Creative Commons License. Heartlight encourages you to share this material with others in church bulletins, personal emails, and other non-commercial uses. Please see our Usage Guidelines for more information.