Who pays the highest price for our lack of faith? 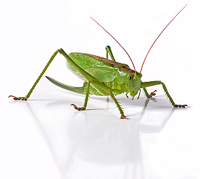 They spread scary rumors among the People of Israel. They said, "We scouted out the land from one end to the other—it's a land that swallows people whole. Everybody we saw was huge. Why, we even saw the Nephilim giants (the Anak giants come from the Nephilim). Alongside them we felt like grasshoppers. And they looked down on us as if we were grasshoppers" (Numbers 13:32-33 MSG).

Pretty descriptive, isn't it? "Alongside them we felt like grasshoppers!" From God's perspective, it was a description of faithlessness: faithlessness with a forty year price tag!

A dozen spies were sent. Ten of the twelve — a 5 to 1 ratio — said we can't do it. The ten said, "It's an incredible land. It's full of wonderful places and resources. But we can't do it. Alongside them we felt like grasshoppers!" The people believed the ten and threatened to hang the 2.

So now, 40 years later, at the same spot, the two — Joshua and Caleb — enter the land with a fresh batch of adults because the ten and those who believed them had spent forty years going to funerals in the desert because of their faithlessness. Joshua leads them on what we call "The Conquest" and they possess the Promised Land. God makes sure that along the way they know that it is not by their own power, but by the promise and power of the LORD that they now take the land.

But, I wonder what all that generation that finally entered the land thought about when they saw a grasshopper?

Forty years. Wasted years. Desert years. Funeral years. Bitter years. Forty years of wandering because of my parents' unbelief. Forty years of sand and tents and moving to the next nowhere place because that generation was dominated by fear instead of being inspired by faith — proven faith from the God who had carried his people from slavery in Egypt to the doorstep of the Promised Land. Forty years of no houses and no stability and no variety for dinner: more manna tonight... ugh!

Yes, Joshua leads his people to conquest, but it is forty years too late for most folks anywhere near his age. So we need to let Joshua and Caleb, and the younger generation of people who enter the Promised Land with them, remind us this powerful truth. There is a terribly high price to pay when God's people — and especially God's leaders — let fear triumph over faith!

Leaders need to count the cost of fear and the loss of faith in God's power and presence beyond our sight. Most count the number of new ventures. Most assess the risk in new opportunities. Most dissect any new proposal to see if there are funds and other resources to advance. For two generations of God's people, the cost of fear was this:

When leaders don't follow God's voice, they cost people life and the opportunity to experience God's power and presence that defies logic, transcends logistics, and overwhelms simple prediction. The story of Joshua and Caleb's faithless generation teaches us the hard costs of this lack of faith-vision:

The bottom line most of God's faithful leaders of every era know: faithfulness to God rarely feels safe, seldom seems practical, and frequently looks threatening!
There is a terribly high price to pay when God's leaders let fear triumph over faith.
As Joshua gets ready to lead God's people out of their forty years of wasted time, he faced a far more daunting task than Moses would have faced. The generations that had experienced God's great deliverance from Egypt are mostly gone, buried in the endless sand in which they trudged away their lives. Those who had seen God's deliverance with the plagues, the parting of the sea, the miraculous manna, the gift of quail, and the life-giving provision of water are buried in the sands of their own fear. Moses, the only leader the people had ever known, is now dead. Their connection to God had to feel broken.

So God steps in to encourage Joshua to do what Moses could not do and lead the people to do what the previous generations would not do: trust God to keep his promises to bring them into the Promised Land. God's words are striking to any of us who would dare lead God's people, our families, and our generation out of the wilderness of low expectations, fear of the future, and concern about dwindling resources:

Not a bad set of tools for God's leaders to take with them today! But, for these tools to be effective, we must:

So much talk I hear today is nostalgic or fearful or anxious. So many churches want to try to maintain the glory days of the past and not chart new territory and conquer new kingdoms as we face a changing and challenging world. But, treading water to stay where we are is no different than stomping in the sand for forty years while we bury each other in the desert of unfulfilled dreams.

"We Felt like Grasshoppers" by Phil Ware is licensed under a Creative Commons License. Heartlight encourages you to share this material with others in church bulletins, personal emails, and other non-commercial uses. Please see our Usage Guidelines for more information.