Where Are You Going?

Life's better when you know where you're going 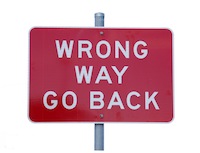 by Tim Archer (08/31/2011) | Hope for Life
On a recent trip to Florida, I heard someone commenting on the traffic problems in Orlando. This person cited a study which indicated that the congestion was caused by the number of people who aren't sure where they're going.

In a story about Jesus, recorded by one of his apostles named John, we read this: "Jesus, knowing that the Father had given all things into his hands, and that he had come from God and was going back to God, rose from supper. He laid aside his outer garments, and taking a towel, tied it around his waist. Then he poured water into a basin and began to wash the disciples' feet and to wipe them with the towel that was wrapped around him" (John 13:3-5).

In Jesus' day, people traveled largely by foot on dusty roads and dirty city streets. They wore open-toed footwear. When they ate, they often reclined around low tables, with one person's feet near another person's head. Foot washing wasn't a luxury; it was part of basic hygiene.

It was also a task that was performed by the lowest of the low, the slaves who did the dirtiest deeds. How could Jesus bring himself to perform such a filthy, humiliating task?

We can be like Jesus in that regard. We can know who we are. We can know where we are going. And that knowledge can free us to do whatever needs doing in this world.

Visit our website, read the four steps you find there, and learn how to get right with God.

"Where Are You Going?" by Tim Archer is licensed under a Creative Commons License. Heartlight encourages you to share this material with others in church bulletins, personal emails, and other non-commercial uses. Please see our Usage Guidelines for more information.