How deep is His love for us? 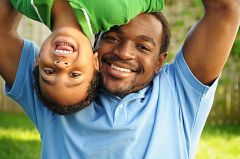 by Tom Norvell (07/11/2011) | A Taste of Home
I have seen it from the bleachers during high school football games. His son is on the field, but the father is completely tuned in. Some dads cannot sit down so they pace the sidelines. They often look like they are talking to themselves. They are not. They are talking to their sons. It almost seems as if there is an invisible direct line of communication between the father and the son.

A father's love is powerful.

I have seen it in auditoriums as a little girl takes center stage for "her moment" in the school play. When the performance is over and the cast members take their final bows she searches the audience until she sees her Daddy. A smile spreads across her face. For her there is only one person in the audience.

A father's love is beautiful.

I have seen it in the airport as a soldier moves through the airport searching every face hoping to see his family. The little ones spot him, run into his arms cheering, "Daddy! Daddy! Daddy!" He picks them up, hugs them, kisses them, and tells them he loves them.

A father's love is precious.

I have seen it in the funeral parlor as sons and daughters stand by a casket in disbelief as they stare at their father. They cry. They laugh. They share stories from their childhood. They recall how he helped them through tough times. They reflected on what he taught them about family, about friends, and about God.

A father's love is enduring.

I have seen it in a child's hospital room as fever from an unexplained illness has stolen the energy from an energetic toddler. Next to the bed sits a dad relentlessly watching, waiting, and praying. He is attentive, gentle and patient.

A father's love is comforting.

I have seen it from the steps in the front of church buildings. Preparation and decorations are complete. The wedding party is in place. There is a significant pause in the action. The music begins as the doors in the back open. Everyone stands. Down the aisle walk a daughter, the bride, and her father. She is beaming. He is fighting feverishly to hold back the tears. He has one line. He hopes he can deliver. With all the strength he can muster he whispers, "Her mother and I." With a hug and a kiss, he releases his daughter to her husband. He takes his seat and wipes his tears.

A father's love is sacred.

I have seen it in spiritual gatherings as lives are changed by the realization of the love the Father has for His people. Tears flow. Hearts are broken. Relationships are reconciled. Hope is realized.

For God so loved the world that he gave his one and only Son, that whoever believes in him shall not perish but have eternal life (John 3:16 NIV).

See what great love the Father has lavished on us, that we should be called children of God! And that is what we are! The reason the world does not know us is that it did not know him. Dear friends, now we are children of God, and what we will be has not yet been made known. But we know that when Christ appears, we shall be like him, for we shall see him as he is. All who have this hope in him purify themselves, just as he is pure (1 John 3:1-3 NIV).

You may have never known the love of your earthly father, and you may never know what it means to love like a father, but you can know the love of the Father in heaven has for you. My prayer is that His love will become real in you.

(Click here for Sarah Sadler's rendition of "How Deep A Father's Love For Us" — http://hlt.me/mpS98b)

"The Father's Love" by Tom Norvell is licensed under a Creative Commons License. Heartlight encourages you to share this material with others in church bulletins, personal emails, and other non-commercial uses. Please see our Usage Guidelines for more information.