Haven't we all wasted enough time piddling around when there is a party going on? 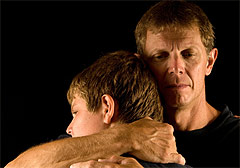 That's a reaction I've gotten from a few folks about the parable we call "The Prodigal Son" (Luke 15:11-32). Of course they are not talking about the whole parable, which Jesus entitles this way: "There Was a Man Who Had Two Sons" (Luke 15:11). But, what they mean is the part about the younger, rebellious, wasteful, disrespectful brother.

And they're right, aren't they. There's something wrong about a kid asking for all of his inheritance before his father dies. It's like saying, "Look dad, we've got no relationship. You're not important to me. In fact, dad, you're as good as dead to me. So I'm asking you to give me my inheritance now! Yep, you heard me. I want what's coming to me right now and I'm putting this place in my rear view mirror forever!" Then he goes off and blows everything. And only after he is broke, dejected, and pitiful does he decide he should go back to daddy.

So there is a sense in which this story is powerfully assuring and deeply moving. We see the rebellious son come to his senses (Luke 15:17), then he heads back to his father. He doesn't go back for the stuff, the money, the privilege, or the house, but he goes home for the father (Luke 15:18; Luke 15:20).

Yet there is something troubling for all of those who have tried to live with integrity and who end up having to clean up other people's messes! Come on, admit it, if you are one of those, there is a twinge of irritation. You're glad ... but also a little mad ... when younger sons come home!

"I hate the younger brother!" Thomas* said this like he was releasing great pressure from deep in his soul. "And I hate it that there are all these people that get to live it up with drugs, alcohol, and sex and then come back and be treated as something special. I haven't done any of that crap. I haven't gotten to do that stuff because I've tried to be good and when they come back they're the heroes. I hate it ... and if I am not careful, I hate them."

This spilled out of him in our men's Bible study group that had been reading through Luke. He began his diatribe with a sneer and finished with tears streaming down his cheeks. The rest of us sat there stunned ... bewildered ... and shocked.

Then Paul spoke up, his voice breaking and tears in his eyes, "Oh Thomas, I am one of those guys, and it's not so glorious. I can't rid my mind of the residue left behind by my sin. I can't shake the sadness because of the bad influence I've had on people who may never come to the Lord. I hate my past. You have been protected from the 'crap' that still swims in my soul. You didn't miss anything."

We came to this holy moment unexpectedly all because of Jesus' story he described this way, "There was a man who had two sons." And in this room of men seeking to honor Jesus and not run from their earnest and honest heart-yearnings, we had older brothers and younger brothers broken on the truth of sin and our Father's grace.

Yes, no matter how we read it, or understand it, there is a price to pay for rebellion and self-will — wasted time, bad influence on others, and the knowledge that many that rebelled will never make it back home — they got lost and stayed there in the far country.

And there is also a price to pay for hearts that covet the freedom of the rebels and yet slog away trying to please a taskmaster when they really have had a Father who wanted to invite them into his party of grace. Their bitterness of unmet expectations, their anger at not being honored as they thought they deserved, and their not getting to decide how the father parcels out his loving approval has ripped the joy out of their hearts. Meanwhile, their Father has wanted to party with them the whole time and they never realized it!

Two lost sons. One Father. A big party ... for both of them. Yet the one who stayed in closest proximity to the father never drew close to him. And when the story ends, we are not sure if he will ever hear — and if we are honest, if we will ever hear — the loving invitation of grace and come into the party.

This, my friends, is what happens when we turn our Christian faith into a religion and righteous into legalism, and a celebration into sullen and boring church services. Jesus gives this message to us — us uptight religious folks, us older brothers. Your Father has come out of the party and is searching for you to bring you home, into the celebration of his grace, and begs you to come enjoy the party.

The party is also for us!
You see, the Father wants us to realize that the party isn't just for the returning rebels, but it's also for the reluctant religious older brothers who never realized that all their Father ever wanted to do was party at their side and bring the joy of grace to their buttoned down hearts.

* Thomas and the other names are not their real names, but this really happened!

Check out these related videos and images:

"Wasted Time!" by Phil Ware is licensed under a Creative Commons License. Heartlight encourages you to share this material with others in church bulletins, personal emails, and other non-commercial uses. Please see our Usage Guidelines for more information.