A Tribute to a Coach and Friend

Why turn down more money? 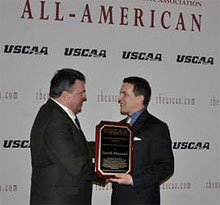 by Rubel Shelly (05/23/2011) | Leading in Hope
Once in a great while these days, you hear about or see from a distance a man or woman who gives you hope for the human race. Maybe we're not all selfish or hiding deep character flaws with phony PR or working the system while pretending to serve others. Maybe faith really works and the Spirit of God truly lives in human hearts. Sometimes you actually get to know one of those people.

Garth Pleasant is one of those rare people, and I have been blessed to get to know him. Work with him. Be his friend. Find him to be a man in whom there is no guile. See him do things at great expense to himself for the simple reason that he believed someone would be encouraged. And watch him deflect compliments and praise to others for the simple reason that his humility won't let him believe he is as special as those of us who know him best know him to be.

For more than three decades, Garth Pleasant has coached basketball at Rochester College. Only two of his teams had losing records, and12 competed in the final four of national tournaments. He and his team cut down the nets as national small-college champions four times — in 1989, 1994, 2004, and 2005.

In 1989, the Basketball Coaches Association of Michigan (BCAM) named Garth Pleasant its Coach of the Year — the same year the University of Michigan blew through their March tournament to win the NCAA National Championship. Garth was inducted into the BCAM Hall of Fame two years ago. He has been paid tribute by the likes of Joe Dumars, Tom Izzo, and Don Meyer. These greats in the coaching field know they have a peer in Garth Pleasant.

You'd think a track record such as this would have earned Garth Pleasant a head coaching job at a big school, a Division-I NCAA school, and a salary multiple times what Rochester College could pay him. It did! But he turned down those offers time and time again to stay with his ministry to young men.

Garth's "Aw Shucks" attitude toward all his achievements is a genuine humility born of his sincere faith. He has always told me his work is his kingdom service to a gracious God. Like the God he serves, he has shown grace to recruit players whose high school coaches and teachers warned him to avoid. Not all those risks had happy endings. Enough have that he is a life-changer for more young men than I can name. While teaching basketball, he taught character.

Carlee Barackman captured Garth's legacy well with a headline in the college's student publication — "It Was Never About the Wins, Championships, or Halls of Fame." In Garth's words: "I try to tell my players that I will know how good a team we were in 15 years when I am able to see how good of a husband, father, and member of society they are. Then I will know how good we were."

He's hanging up his whistle, but his investment in young souls lives forever.

Remember your leaders, who spoke the word of God to you. Consider the outcome of their way of life and imitate their faith (Hebrews 13:7 NIV).

Check out Rubel's new book, "I Knew Jesus Before He Was a Christian and I Liked Him Better Then" — http://hlt.me/jb0VyW

"A Tribute to a Coach and Friend" by Rubel Shelly is licensed under a Creative Commons License. Heartlight encourages you to share this material with others in church bulletins, personal emails, and other non-commercial uses. Please see our Usage Guidelines for more information.