Sometimes we've just got to admit we blew up before we make a bigger mistake! 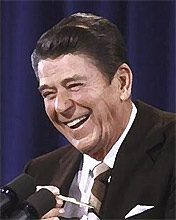 by Rubel Shelly (02/28/2011) | Leading in Hope
Memories of Ronald Reagan were revived recently in connection with the one hundredth anniversary of his birth. Whether the former president was a political hero to you or not, surely you have to admit that he was a masterful communicator. Recent mention of him reminds me of a story he told before the National Association of Towns and Townships.

He was lamenting government's inability to solve all the problems of our nation — and lamenting even more the expectations of so many that government should solve all those problems. This was his set-up and story ...

Well-intentioned individuals thought if they were only given the power they could right every wrong. As I said, they were well-intentioned, but there's a well-known road paved with good intentions. No one likes to go where it takes you.

There's a story about a young fellow riding a motorcycle. He had good intentions too. The wind was kind of chilly and coming through the buttonholes on his jacket, and so he got this idea. He stopped and put his jacket on backward and that eliminated the chill factor through the buttonholes, but it kind of restricted his arm movement. And down the road, his motorcycle hit a patch of ice. He skidded into a tree. When the police got there, a crowd had gathered. And they elbowed their way through and they said, "What happened?" And one of them said, "Well, we don't know. When we got here he seemed to be all right, but by the time we got his head turned around straight, he was dead."

Reagan went on to say, "I think that has a tie-in with some of the things the government does."

The story got howling laughter from his audience back in 1983. But, the issue of good intentions gone awry is perpetually relevant. So his story fits some of your personal and family decisions. It probably describes some company policies you recall — or with which you are wrestling. It certainly applies to many decisions and programs and appointments in churches.

When there has been a wreck in spite of your good intentions, you can only hope there have not been too many fatalities. But you do have to be courageous enough to name the decision or action for what it turned out to be — mistaken, damaging, just plain wrong. Having named it, apologize. Ask forgiveness. And ask for God's help in putting things right again.

When there has been a wreck in spite of your good intentions, you can only hope there have not been too many fatalities.
Good intentions don't cancel out bad decisions or fatal outcomes. We are still accountable for them and can only pray for wisdom to do the right thing now.

The Wise Man said it years ago:

There is a way that appears to be right, but in the end it leads to death (Proverbs 14:12 NIV).

"Good Intentions" by Rubel Shelly is licensed under a Creative Commons License. Heartlight encourages you to share this material with others in church bulletins, personal emails, and other non-commercial uses. Please see our Usage Guidelines for more information.