Do you sometimes feel useless? 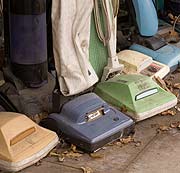 The nations will see your vindication,
and all kings your glory;
you will be called by a new name
that the mouth of the LORD will bestow. (Isaiah 62:2 TNIV)

I can't think of a worse insult than that. It's way past contemptuous and downright dismissive — dismissive of a person's worth as a human being and dismissive of his redeeming value. To insult someone's intelligence, ability, or even his character is one thing. That kind of insult at least berates a person for something done, not done, or not done well. However, to call someone useless is to say that he or she has no place in society and no function in the world. To call someone useless is to imply that he or she wouldn't be missed.

Buried in one of the more obscure books of the Bible is a minor character who knew what it was to be considered useless. If you crack open the book of Philemon — which, if you're like me, you haven't done in a while — you'll make his acquaintance. His name is Onesimus. As a matter of fact, he's the main subject of the book — more accurately, he's the main subject of Paul's letter to a man named Philemon. He's the reason Paul wrote the letter.

Since the only source we have to reconstruct Onesimus' story is this short little letter — 25 verses — it's hard to say much of anything definitive. However, reading between the lines, you can put together a few things. Onesimus was a slave belonging to Philemon. Though Philemon had become a Christian after he met Paul, he continued to own his slaves — not uncommon in those times, apparently — though as a Christian, he would have been expected to treat his slaves well.

Onesimus ran away, probably to Rome. He got lost in the big city. It was illegal for a slave to run away, possibly a capital offense, but cities have always provided a certain amount of anonymity for those who don't want to be found. Only, someone found him. Not his old master, Philemon, but his new one. He met Paul, and Paul introduced him to Jesus. Onesimus found himself belonging to someone all over again. Only this time, he didn't mind so much because his master was Jesus.

Somewhere along the line, Onesimus must have told Paul his story. I wonder if he was surprised when Paul told him that he had to go back? It's a little surprising to me, but apparently Paul felt that if Onesimus stayed away, he was defrauding Philemon. And perhaps as surprising as Paul sending Onesimus back is Onesimus actually going.

As he returned "home," he took along a letter from Paul. This letter makes clear to Philemon that his slave is now his brother in Christ and that Onesimus is dear to Paul. "I am sending him — who is my very heart — back to you," Paul wrote. He insists that Philemon should welcome Onesimus back and implies that he should consider sending him back to continue helping Paul.

Somewhere along the line, Paul must have heard something. It sounds like something he might have heard from Onesimus or even from Philemon himself. See, the name Onesimus means "Useful." His parents probably gave it to him in a fit of optimism, imagining the contributions their son might make to society. It seems to have become sort of a joke for Philemon; it probably got laughs all around whenever Philemon "accidentally" called his slave "Useless."

In any case, buried in this obscure little letter is this sentence: "Formerly he was useless to you, but now he has become useful both to you and to me" (Philemon 1:11). I can only imagine how Onesimus must have felt when he read that sentence. That he, a runaway slave, worth only the work that he could do — and once in the eyes of his master he was not even worth that, he was useless — was now considered useful to the great apostle. His usefulness was hard for him to imagine, I'm sure, but thrilling to hear.

Isn't that what the gospel's about when we get right down to it? God makes the useless useful? Think of Jesus making useless legs strong enough to support weight and useless eyes able to see. Imagine making a useless, cheating tax collector into a philanthropist. Think about Jesus taking a woman who was considered useless for everything but carrying water and temporarily gratifying her partner — remember she was thrown away by five husbands — but the Lord transforms her into an evangelist to her whole town. Envision taking a useless, naked lunatic, possessed by a legion of demons, and turning him into a witness for the power of God.

The poor and homeless live on the margins of our society, useless, and overlooked except when we see them in our neighborhood or holding up "Will Work for Food" signs at intersections.

Jesus doesn't see it that way.
Immigrants to our country are often treated as useless by those of us who have been here a few generations. In the eyes of many, they useful for nothing except to do the jobs we don't want to do for wages most wouldn't dream of accepting.

We relegate those with mental illness or with addictions to the background of visible society. We often assume that they can't make much of a contribution to the greater good. We treat them as useless and burdensome.

Check in with many of our schools. Notice how classmates, and even a few teachers, can treat students who are a little slower, who learn differently, or who aren't quite as talented or as good-looking as the other kids. The word "useless" might not be spoken, but don't imagine that those kids don't get the message loud and clear.

Now notice how we treat our elderly. We are often impatient with their frailties and are so annoyed by their presence that we arrange keep them out of the way. They are often warehoused as people who have outlived their usefulness.

Jesus doesn't see it that way. If you've gotten the message that you don't matter, that you're not useful, then you need to know that the Lord maintains a dissenting opinion. Beyond the talents and opportunities you have, beyond what you may or may not be able to do, you are useful in his eyes. Even if no one else sees your value, Jesus does. Even if you don't notice it in yourself, he does. He loves you deeply and knows that if you can just experience that love for yourself, the real you will emerge like a butterfly from a chrysalis. He went to a Cross for you as proof that however useless you might have been to the people around you, you are useful to him.

All that's left is the response. Something in us rightfully resists letting someone else be our master. But when that Master wants nothing more than for you to be what he made you to be, why fight it?

You're irreplaceable to him. Go knock on his door and let him welcome you home.

To him, it won't be the same without you.

"Useful" by Patrick D. Odum is licensed under a Creative Commons License. Heartlight encourages you to share this material with others in church bulletins, personal emails, and other non-commercial uses. Please see our Usage Guidelines for more information.