To Seek, to Reach Out, to Find 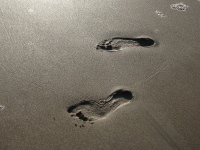 by Tim Archer (10/20/2010) | Hope for Life
It was meant to be a towering achievement ... pardon the pun. Thousands of years ago, a group of men came together and decided to build a city, a great city with a tower that would scrape the sky. Their plan was to make a name for themselves, to leave an indelible mark on this world.

Working together, they felt that they could do anything. Human intelligence. Human technology. Human achievements. These things would allow them to prosper and be remembered for ever.

That was man's plan. But it wasn't God's plan. God wanted them to depend on Him, not just lean on one another.

So He made it so that they spoke different languages, which led to them scattering and forming nations according to those languages. The city was called Babel because of the babble of languages that was created there.

For years, I read this story and only saw God's actions as punishment, an almost capricious act of jealousy and anger. Then someone pointed me to a passage in the New Testament, when the apostle Paul was speaking to a group of intellectuals in Athens. Paul told them:

From one man he made every nation of men, that they should inhabit the whole earth; and he determined the times set for them and the exact places where they should live. God did this so that men would seek him and perhaps reach out for him and find him, though he is not far from each one of us (Acts 17:26-27).

An interesting side note is the fact that we don't know the names of any of the builders of Babel. They weren't recorded. But in the very next chapter of Genesis we meet a man who never built a city or a tower, a man whose only construction was the building of altars. God came to him and said, "I will make your name great."

We still have a God who wants us to find Him
That was Abraham, of course, the father of three of the world's great religions: Judaism, Islam and Christianity.

I can help you find Him. Write to me at tarcher@heraldoftruth.org or visit our website: www.hopeforlife.org.

"To Seek, to Reach Out, to Find" by Tim Archer is licensed under a Creative Commons License. Heartlight encourages you to share this material with others in church bulletins, personal emails, and other non-commercial uses. Please see our Usage Guidelines for more information.